In my January post, I quoted a letter from Bruce Thomson, a senior conservation officer with the  Queensland Parks and Wildlife Service. I contacted him, and he sent me a follow-up letter dated 28 April 1997. Here, then is the text of letter, except for the names of the witnesses, which I have deleted to protect their privacy.

*   *   *   *   *   *   *   *
My interest in these animals is relatively new and really started with the report of an animal on the Toowoomba Range just near Toowoomba. I think this sighting is particularly significant since it seems to have been later (that day) corroborated by the discovery of footprints at the site where the sighting was made. I have enclosed details of this sighting for your records. 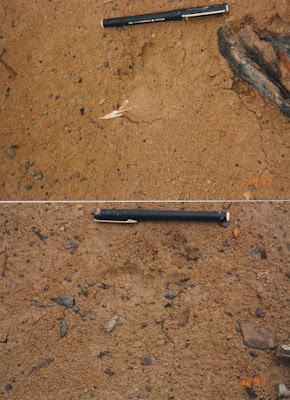 He included a number of photos of footprints dated 28 Jan 1997 but, although they were evocative, I cannot say they were conclusive enough to be identified as feline. One thing was apparent, however: there was no sign of claws, despite the mud being fairly soft. He also included the following memorandum from a Wildlife Ranger.

Mr. P. stated that a 5.15 am [ie around sunrise] on Sunday 26-1-97 he was traveling down the Toowoomba range heading for Brisbane. At a spot opposite the "Skirmish" operation he noticed an animal obviously feeding on a road killed carcass beside the highway. When he was within 30 (?) metres of the animal it stood up. At this point Mr. P. noted that it was approximately the same height as the grill on the Toyota Camry he was driving (about 60 cm), and approximately 1.2 metres long. It had a thick tail of equal length to its body which hung down onto the ground and trailed behind the animal before curling up at the tip. 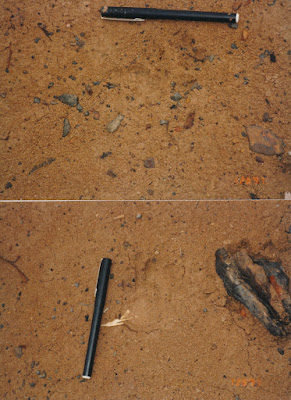 Mr. P. stated that the animal was a "stunning jet black creature" and that he was tempted to get out of the car for a better look. He freely admitted that fear and respect for the sheer size of the animal caused him to reconsider this option in favour of staying in the vehicle. As he drove closer to the animal it slowly moved off into the surrounding scrub ("it slunk off in exactly the same way as a cat - it was definitely a cat - there's no way that it was a dog of any sort").
Mr. P. stated that he had seen Black Panthers at various zoos and that the animal he saw appeared to him to be almost identical.
Ranger R. H. and I visited the scene of the encounter on 28-1-97 and obtained several photographs of large feline-like footprints which we located in the mud adjacent to the highway.
If the estimate of height was accurate, the animal would have been almost twice the size of the largest (known) feral cat, and within the range of a black leopard. However, neither species has a tail as long as its body; 50% to 60% of the head-body length being more reasonable. But to return to Mr Thomson's letter -

Other sightings that I have checked out include the following. They are accompanied by various degrees of confirmation which range from single sighting by single individual to single animals seen by numerous witnesses over several days/weeks!

There are other reports from further west, in the State Forests near Chinchilla but I haven't been able to find any reliable stories to tie to these stories yet.

PS.  I have finally got around to posting the results of my M.Sc. thesis in layman's terms. This was on the behaviour of the koala, so if anybody is interested in reading about Australia's favourite marsupial, click here. You will not be disappointed.
Posted by Malcolm Smith at 14:56