I am pleased to announce that I have just published three new cryptozoological books, made possible by the mass digitalisation of old newspapers, journals, and other documents by the Australian National Library. The first two, The Truth About Bunyips and Australian Sea Serpents, will, I am confident, become the definitive works on the respective subjects. The third, Forgotten Sea Serpents will be required reading for all those seeking to complete their documentation of this unusual subject. These books are available in both paperback and e-book format from most branches of Amazon. (I know I have even sold a couple in Japan.) 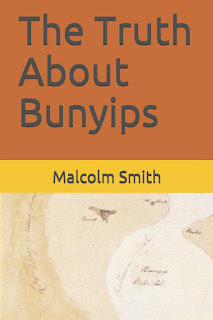 The Truth About Bunyips
Every Australian knows that bunyips are mythological denizens of the inland rivers and lagoons, but hardly anyone knows what they are supported to look like. You'll find a few children's books on the subject, but only the rare article or book on the actual folklore. By and large, the authors have had to copy from each other, relying on secondary sources, because the original sources were so old and hard to access. Well, I have finally tracked down the original sources. It is established that the original Aboriginal myth emanated from the Riverina, along with the central inland and coastal areas of Victoria. It is also established that, even before they had heard the Aboriginal myth, white settlers were claiming to have seen strange creatures in the inland waterways. Even after an explanation was provided, they still kept seeing them - some of them really bizarre in appearance. The book ends with a table of 53 sightings - the last one in 1989! 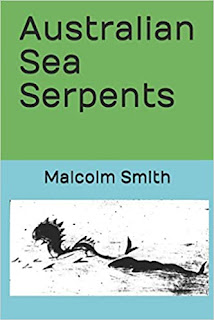 Australian Sea Serpents
I was inspired to right this while trolling through old newspaper records. My original intent was to locate the original reports which I knew only from the secondary source of Heuvelmans' classic 1968 compendium, In the Wake of the Sea-Serpents, and I kept coming across reports which no other researcher had discovered. "I could turn this into a book," I thought. The book includes chapters of unknown big fish, the Tasmanian "globsters", and a few loose ends, but the core consists of 87 numbered sightings of sea serpents, the most recent being in 1995. Furthermore, 49 of the 87 were new cases i.e. not recorded by earlier researchers. Some of the 87 could reasonably be identified as known animals, some sounded like hoaxes, and some were too vague for a decision to be made, but after discarding them, that still left 60 worthy of serious consideration.
If I do say so myself, I regard this compendium as exhaustive. I am fairly certain you won't locate any additional written reports prior to (say) 1950. The information is fully documented, and a number of maps are provided at the end.

Forgotten Sea Serpents
Personally, I find it more believable that there might be large unknown animals in the open sea than cooped up in enclosed lakes, where they surface only only once in a while. Yet the strange irony is that people and newspapers are happy to report lake monsters these days, but not sea serpents, although prior to the Second World War they were far from reticent.
As I was trolling through Australian newspaper files researching the previous book, I kept coming across reports from other parts of the world. Cross-checking them against Heuvelmans' list, I discovered that many of them had also been missed, overlooked, or ignored by previous researchers. It seemed to me I would be doing the cryptozoological world a favour were I to publish them in a single volume. But even I was surprised to discover they numbered more than 70. Heaven only knows how many others are out there, which never made it to the Australian press!
Anyway, this volume has been compiled as a service to you. Anybody looking for completeness in their data on this esoteric subject would be advised to acquire it.

As far as e-books go, I consider the Kindle e-reader, which is very easy on the eyes, as the best invention since sliced bread. However, if you don't have, or don't want, one, you can still download a free Kindle app for your PC, Ipad, or phone.
Posted by Malcolm Smith at 14:19