On pages 368 - 369 of In the Wake of the Sea-Serpents, Bernard Heuvelmans describes the sea serpent allegedly seen by the crew of the Tresco near Cape Hatteras in 1903. His opinion was that the story "reaches the peak of fantasy", and I have to admit that, from the summary provided, it did seem to suffer from credibility problems. Nevertheless, one always wishes to refer to the original document, which was cited as the October 1903 issue of The Wide World Magazine. Now, The Wide World was a monthly magazine in which members of the public related their own adventures in various parts of the world. It was a requirement of publication that they certify that the story was true in all particulars and, in most cases, I suspect they were. Most of them lacked the normal structure of fiction - the beginning, middle, and end - and had the air of truth about them. Just the same, there was no method of confirmation, and a number of hoaxes certainly did make their appearances in its pages.
I have been an avid fan of The Wide World ever since I was introduced to it as a boy, and have collected every edition I could lay my hands on. Regrettably, this includes only a couple before World War II. Then, a couple of months ago, a light bulb went off in my head. The Internet Archive contains a number of the early bound editions, including volume 12, where the relevant article appears on pages 147-155. I would really like to introduce you to this wonderful magazine, and I would seriously suggest that you read it. But for those who lack either the time or the inclination, I shall publish the article here.

Will the problem of the " sea-serpent " ever be satisfactorily solved? Scientists and others scoff at the idea of its existence, and cast ridicule upon those who claim to have seen it ; nevertheless, hardly a year passes without a seemingly well authenticated account of its appearance being added to the cases on record. We publish herewith the story of Mr. J. O. Grey, second officer of the SS "Tresco," of the well- known Earn Line, whose statements are corroborated by the captain of the vessel and other eye-witnesses.


- - - - - - - - - - - - - - - - - - - - - - - -  - - - - - - - - - - -
So, What's Wrong With This Story?
Well, we could start with the tone. Heuvelmans complained that the crew's panic was "described in such terms as Poe or Ambrose Bierce might have used." Well, yes. But here an explanation is due. It is a sad fact of life that literary skill and the sort of experiences worth writing about are gifts only occasionally granted to the same person - an anomaly which provides employment for ghost writers, but nevertheless deprives the world of a lot of worthwhile stories. Typically, articles for The Wide World were rewritten by the editor. One trusts that he merely improved the style and adjusted the length to fit the pages, but did not change the substance. But this article contains more purple prose than was typical for the magazine which, what with the newspaper report to be discussed below, suggests to me that it was in the original.
Another thing to understand is the artwork. Whether it involves sea serpents, UFOs, or any other anomaly, typically the artwork takes on a life of its own, and is presented much more frequently than the text. It is also important, therefore, to ask yourself whether it was produced by:

With respect to the Tresco monster, the drawings (there were more than one) are good enough as far as they go, but they were made by the magazine illustrator without any input from the writer - unless they were based on the "drawings" mentioned in the last paragraph.
Heuvelmans also questioned the extreme precision in the perceived dimensions of the scales: "some eight inches long, five inches wide, and four inches high" - and rightly so.
Problems abound in the described anatomy of the monster. For a start, it was, to put it bluntly, a tad on the large size. Just the same, Heuvelmans recorded many sea serpents as large as the biggest whales, and fear can make one overestimate size, so perhaps we can leave it as that.
Despite the author's assumptions, it must have been a reptile rather than a mammal; mammals are not covered with scales, nor do the possess dorsal fins or  crests on the head. However, they do move with vertical undulations. A reptile would lash its tail horizontally, rather than vertically. (In practically every other sea serpent sighting, the tail has not been visible.) But what can be made of the fins - a foot wide, extending along the side of the body, and beating like fans? A reptile or mammal would have paddles, not fins. There is something fishy there. Even so, they sound too narrow to manoeuvre an animal of that size. Also, I wonder why on earth its colours would be darker on the belly than the back, exactly the reverse of nearly every other swimmer. It would make it stand out very clearly when viewed from below. And let's not forget that every huge monster was once a little monster, vulnerable to predators.
Finally, there have been several hundred sea serpents recorded over the years. Some of them possessed what might be considered scales. But a head with a pouch, two walrus-like fangs, and a crest, not mention "baleful" red eyes, is unique. When an alleged sighting is of something biologically unlikely, and is never confirmed by a second report, the assumption must remain that it is untrue.


On the Other Hand . . .
Heuvelmans did go to the trouble of checking Lloyd's Register, and confirmed that the author was pretty accurate with respect to the Tresco, which caused him to add: "The writer clearly took more trouble with his shipping information than his zoology." But there there is more to it than that. I would strongly recommend that you follow the link I provided and read the original PDF article, because it contains photographs too numerous to copy here: of the ship, the author, the captain, the other witnesses, and the author and quartermaster in the exact positions occupied when the monster was first sighted. 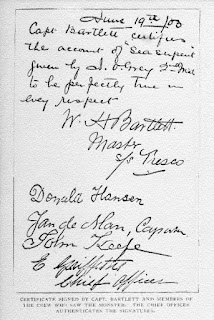 It also includes a sketch of the course of the ship, and copies of three documents. The first was the author's certificate that the account was completely true, and dated 22 June from Philadelphia, which was presumably the date the article was sent to The Wide World. (You will remember that they arrived back at Philadelphia on 14th.) The second was the enclosed certificate from the captain and the other witnesses, their signatures certified by Chief Officer Griffiths whom, you will remember, did not see the monster himself.
Most important of all was a fascimile of the ship's log for the date in question. As you can see, it was signed by Chief Officer Griffiths, and contained the citation:


10 am passed school of sharks followed by a huge sea monster. 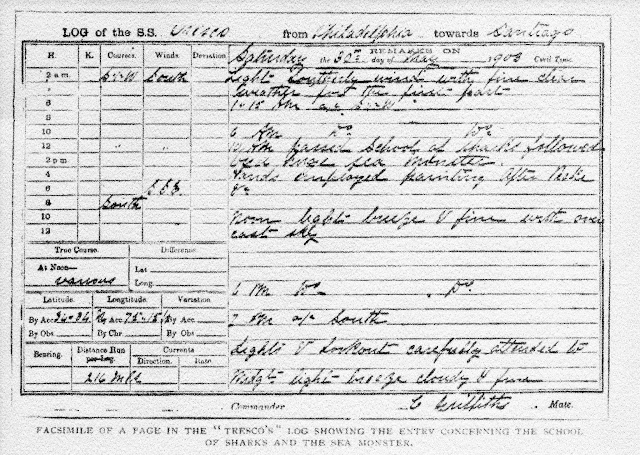 Now, falsifying a log is a pretty serious offence, not something one would rush into just to satisfy what was basically a lark by the Captain and Second Officer - especially since it was not exactly essential for the hoax. You will note, too, that the home addresses of the Captain, Chief Officer, and owner were all provided, possibly under the assumption that someone might want to check up on it. There was also a small titbit which a hoaxer would be unlikely to add: that the Captain heard a "snort", which the writer didn't.
In addition, there was the last paragraph, about preparing a report for the Philadelphia press. I don't know how the Philadelphia press took it (perhaps one of my American readers could look it up), but The Chicago Daily Tribune was more obliging, publishing this paragraph on page 12 of its edition of 17 June.

THE SEA SERPENT OF 1903.
The sea serpent of 1903 at last has put in its appearance. It was observed by truthful Capt. Bartlett of the good steamer Tresco. When ninety miles south of Cape Hatteras the captain noticed a peculiar disturbance in the distance and that the disturbance was headed his way. In a short time it arrived and turned out to be a great number of sharks tearing through the water "like all possessed " on their way towards shore. An hour afterwards Capt. Bartlett noticed a dark object in the distance, and, thinking it a derelict, steered for it. When a short distance from it the "derelict" slowly lifted itself above the water. Instantly the crew went below and barricaded the doors, and through the port- hole in the wheelhouse the captain saw the sea serpent.  "Half dragon and half serpent, it was the most hideous and loathsome reptile, with its gaping jaws and bloodshot eyes. From each side of its horrible mouth two large tusks protruded, similar to those of a walrus, and its lips were dripping with a discolored saliva which emitted a most offensive smell."  The captain was not in a condition of mind to make accurate estimates of measurement, but he thinks the serpent was about 100 feet long. Fortunately, instead of making an attack "it turned tail, and, with a swish and a swirl of the water, sank in the depths," probably much to the relief of Capt. Bartlett and his crew, not to mention the panic stricken bunch of sharks. Now, this is a sea serpent worth having. The veracious captain's statement shows it has not suffered "a sea change into something rich and strange," but retains all its old horrible and terrifying aspects. It is no ordinary cephalopod but a worthy descendent of the serpent which Regulus and his army made war on with catapults, and of the monster Olaus Magnus saw, which not only ate calves, sheep, and swine but also "disturbs ships, rising up like a mast and sometimes snaps men from the deck," or even of Fafnir, spurting and smoke from his cavern. The sea serpent has been an unconscionable time putting in an appearance, but better late than never.  For what should we do in these days of strikes, and floods, and cyclones, and cloudburst, and droughts, and fires, and barbaric regicides had we not our old friend the sea serpent for pleasurable entertainment ?

You will note that here the Captain becomes the chief protagonist, rather than Joseph Grey. Perhaps he did that on purpose, or perhaps there was some confusion. (I have enough experience of the press to know that they usually get some detail wrong.) Perhaps he said "we", and the journalist assumed it meant "I". Perhaps he simply handed over Grey's report, because the newspaper appears to quote directly from it. (And note the "purple prose".) It is always possible that The Chicago Tribune simply picked up the story from a correspondent in Philadelphia. In any case, it appears that the Captain went out of his way to present the story upon landing.
If this was a hoax, it was a pretty elaborate one, involving several people.
I am reluctantly driven to the contradictory conclusions that it was no hoax, but that the animal reported could not have existed. Don't you just hate it when that sort of thing happens?
Posted by Malcolm Smith at 21:03

Email ThisBlogThis!Share to TwitterShare to FacebookShare to Pinterest
Labels: SS