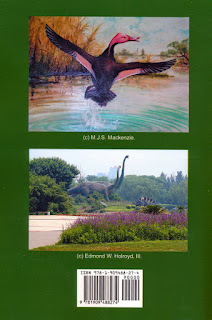 Volume 3 of The Journal of Cryptozoology is now out, containing 97 pages, compared to 80 for the second volume and 62 for the first. The reason I have chosen to depict the rear cover is that because it is more interesting than the regular boring front cover, and by now you will have probably guessed that the contents involve ducks and dinosaurs. As in previous issues, the five papers are all of scientific journal quality, but it is interesting to note that none of the contributors cites a scientific establishment as an address. So what does this say about cryptozoology - that it is dominated by amateurs, or that it is dangerous for professionals to be associated with it?

1. The first paper is written by Jonathan D. Stiffy, and is entitled, The thunderbirds of western Pennsylvania - mistaken identity or migratory cryptids?
Readers will no doubt be aware that alleged sightings of these abnormally large birds are by no means rare. When I referred to them on my anomalies blog, an anonymous commentator provided a report of his own. In the present paper, Mr Stiffy cites five Pennsylvanian sightings where the size could be reasonably estimated - one of which had, in fact, been mentioned on my blog. He then breaks down the possible contenders according to size and shape. One of the sightings was tentatively identified as a great blue heron, Ardea herodias, but the others were too big by an order of magnitude for any known species. The only possibility he could come up with is surviving teratorns. However, in the absence of feathers and nests, he suggests that Pennsylvania is on a migratory route, rather than a breeding ground. Of course, that begs the question of where they come from, and where they are going to. Also, the creature witnessed on 20 May 2008 possessed bat-like wings spanning more than 20 feet [6 metres]. The author's  reference indicates that it was observed close up on a road in broad daylight. If the story were genuine, it could only be a pterosaur or a really, really big bat. I have real difficulties in either case.

2. New material on the moha-moha by Ulrich Magin. I hope I will be forgiven for spending more words on this paper. The author did me the honour of citing both my book and my essay in this blog about the sea serpents of 1934. Also, the moha-moha was one of the first cryptics which caught my attention as a teenager. I was always fond of the moha-moha, and was most disappointed when Heuvelmans provided compelling reasons to treat it as a hoax.
For those not in the know, the moha-moha was a beast which allegedly appeared on 8 June 1890 in the water close to the beach near the northernmost point of Fraser Island in southeast Queensland. Approximately 30 ft [9 metres] long, it possessed the head and neck of a snake or a long-necked tortoise, a bulky body referred to as a "carapace", and a long fish tail, complete with bifurcated vertical fin and scales which overlapped vertically (!).
The initial report appeared in the journal, Land and Water on 3 January 1891, the author hiding under a Latin nom de plume, and the animal was named "moka-moka". Then came a detailed account in The Great Barrier Reef of Australia by W. Sackville-Kent in 1893, in which the author was identified as Miss S. Lovell, the Fraser Island headmistress, whose white inhabitants signed off the account as confirmation. But now, the named had been changed to "moha-moha" - obviously the result of a typesetting error, or a misreading of a handwritten account. It was also given the scientific name (invalid, for lack of a type specimen) of Chelosauria lovelli, or Mr Lovell's turtle-lizard. (Apparently no-one has previously noticed that Sackville-Kent got the gender of the second name wrong; it should have been lovellae.)
Despite being based in Germany, Mr Magin has been surprisingly successful in digging up obscure background information on Australia. He argues that there did exist an Aboriginal tradition of large sea monsters in the area, and quoted some actual sightings by white people which he considers backs up the moha-moha story. Nevertheless, if I may be forgiven for being pedantic, I would like to clarify a few points. Some of his information comes from the vast collection of digitalised newspapers on Trove. However, from experience, I know that many of these stories were picked up and reprinted many times, usually with little variation, by several newspapers. Thus, his source for the 1934 Bowen sea serpent report was an unidentified newspaper published on the Australian CFZ website. A quick search on Trove will reveal that the article appeared in The Western Australian (Perth) of Saturday 25 August 1934, page 17, and it was merely a shorter version of the one I had published on my own blog, which the author cited. Similarly, the original of the 1845 article on the bunyip, which he quotes from a third hand source, was the Geelong Advertiser and Squatters' Advocate of Wednesday 2 July 1845 on page 2, which can be read here. It is also the first record of the word, "bunyip" in print.
Personally, I do not think that the multi-humped Townsville sea serpent of 1934 resembles the moha-moha. Also, I would dispute that the Darling Downs legend of the mochel-mochel confirms an Aboriginal tradition of a large sea monster. The Darling Downs is on the opposite side of the Great Dividing Range, and the Aborigines there would have had little contact with the coastal tribes. Furthermore, the mochel-mochel was a freshwater monster, not a sea monster. Also, the name is not a cognate of "moka-moka". In Indo-European languages it is common for velar consonants, such as "k" to mutate into palatals, such as "ch". We have only to see how the Latin cattus became the French chat, or compare the English doublets, dyke (from Old Norse) and ditch (from Anglo-Saxon). However, this does not take place in Aboriginal languages, where palatals and velars are separate consonantal sets. Indeed, the sets which tend to mutate into each other are the palatals and interdentals.
In my opinion, Mr Magin's most important contributions are two fold. The first is the biography of Selina Lovell. She was not only well respected as a school teacher, but was also an excellent amateur botanist who discovered three new species, two of which bore her name. Also, her original Land and Water article provided a description of another sea creature, called the "womang", which was detailed enough to be identified as a manta ray.
Also, it turns out that, on 10 February 1891 ie just 5½ weeks after the publication of the Land and Water article, she wrote to the Government Commissioner at Thursday Island asking whether anybody had seen the animal. She gave the name, "moka moka", and enclosed some sketches which were apparently identical, or similar, to the ones previously published.
This puts a different perspective on the case. My original opinion was that she had written to Land and Water as a joke, and that when Saville-Kent guessed she was the author, and contacted her, she felt obliged to continue the hoax. However, writing to an official at the other end of the state so soon after the original publication is difficult to reconcile with such a scenario. It just goes to show that human nature, or nature itself, still contains a lot of surprises.

3. Target practice - evaluating available fine-resolution satellite imagery as a potentially useful tool in cryptozoology, by Edmond W. Holroyd, III. This is where the dinosaurs on the back cover come in. As some of you will be aware, the jungles of the People's Republic of the Congo are alleged to harbour a cryptic resembling a sauropod dinosaur. It occurred to Mr Edmond that it might be possible to pick up such things by satellite imagery, so he used Google Earth, after reducing the clarity of the images to what might be expected for satellite imagery, to examine the life-size dinosaur models in a Chinese park, automobiles in a car park, and giraffes in a zoo. The conclusions were that such imagery might have some value, but very little - which is disappointing, but worth knowing.

4. Searching for the pink-headed duck in Myanmar, by Richard Thorns. This is where the second picture comes in. Although always rare, the pink-headed duck once ranged from northern Burma to Nepal, and as far south as Madras, before dropping out of sight, presumably extinct, in the 1940s. But because of unconfirmed recent sightings, Mr Thorns had made several previous expeditions searching for it in northern Burma, and now took the opportunity to report the results of the most recent search in a peer reviewed journal. Unfortunately, it was unsuccessful but, considering the history of the takahe and the cahow, hope springs eternal. It also serves as a reminder that cryptozoology is more than just "monster hunting". Sometimes it involves more mundane animals.

5. The longest paper in the journal is entitled, Bessie, the Lake Erie monster - assessed and assembled, by Scott E. Strasser. Bessie is alleged to be a serpentine creature 6, maybe 12 metres [20 to 40 feet] long. The author summarises seventeen of the best reports, then critically examines the evidence. He makes the obvious point that anything entering from the sea must first of all negotiate either Niagara Falls or the locks of the Welland Canal. He then goes into the truly horrifying history of the ecological devastation suffered by the lake, which ought to have put paid to the breeding population of any self-respecting monster. The possible candidates are listed, but all of them are too small, even allowing for witness exaggeration, except the sturgeon. Indeed, many of the reports do sound suspiciously like a sturgeon, and one might be prepared to leave it at that. Just the same, what are we to make of the creature observed by a Baptist minister and his wife in 1892? It had a large head held 4.5 metres [15 ft] above the water. It just goes to show: nothing is ever clear cut in this business.
Posted by Malcolm Smith at 04:13