A couple of months ago I published a translation of Michel Raynal's article on the legendary "wild man of the Pyrenees". This time, I shall follow it up with a translation of a follow-up article by the same author of the possible capture of such a creature in the mid-18th century. The original article is entitled, Une figuration de l'homme sauvage dans les Pyrénées? and it was published in Bipedia 4, 1990, pp 16-18, the original of which can be found here.


A Representation of the Wild Man in the Pyrenees?
by Michel Raynal
ABSTRACT : In 1760, an article was published about a so-called "satyr" shown in Barcelona ( Spain ) : It was a human-like hairy creature with some strange features, such as "ears like a tiger's" or "whiskers like a cat's". An illustration is available, but it was made from the article, not by a first-hand witness ; from an analysis of the text, having in mind the data summarized in Raynal's previous article for 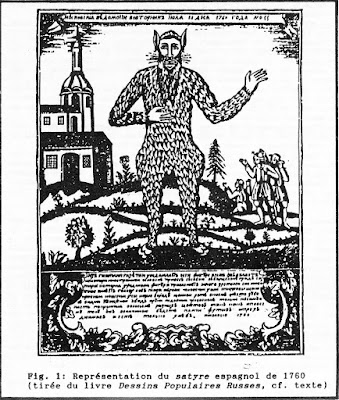 The origins of the creature not being given precisely, it could have been captured far from Spain by the said "foreigners"[the text mentions only one] who exhibited it as a fairground curiosity. However, it seems more logical to suppose that it came from the Pyrenees, one of the last places in Europe where the Neanderthals still subsisted until the end of the eighteenth century (HEUVELMANS & PORSHNEV 1974, HEUVELMANS 1986). In that case, the "foreigners" in question would have had some chance of being French!
It is clear in any case that the drawing was not based on an eye witness; it turns out to be a traditional representation of the Hairy Wild Man, to which the illustrator has added some features borrowed from the text, which he has naively placed at the foot of thepage the reported expressions. That is particularly manifested in the cloven feed, evidently "deduced" from the title of the article; a real, self-respecting "satyr" would have to have the feet of a goat! It has, however, been demonstrated that this is a naive visualisation of the Neanderthal's foot, adapted to the mountain, "to know the goat's foot", as is popularly said (HEUVELMANS & PORSHNEV 1974, HEUVELMANS 1980, RAYNAL 1989).
Coming back to the description, bearing in mind the fact that the expressions must be especially placed at the foot of the page (and materialised in the form of a visual pun, as in the sketches of Raymond Devos), but interpreted: one shall refer back to the authoritative study made by Bernard HEUVELMANS (1980) on the "Different peoples of Ancient Ethiopia" (headless men, goat-footed men, elephant-eared men, sucklings of bitches, etc, etc) which the ancients loved to situate in Africa.
First of all, one should not be misled by the classification of the creature as a "satyr". These days, any sensational journalist worthy of the name would label it "the Wild Man of Barcelona" or "King Kong of Catalonia". In the mid-eighteenth century, it was the word, satyr which drew the crowds, the satyr which rapes pretty girls being the prototype of the Hairy Wild Man: even in  1816, Lorenz Oken described the chimpanzee under the generic name of Pan, which it still possesses!
By "ears of a tiger", one must obviously understand pointed ears: either the same shape as the peak of a tent, effectively pointed, or with a brush of hair (as in a lynx, for example) producing the same illusion.
The body is covered with hair, but not the face (hence the checks are visible, even said to be read), doubtless with the exception of some very sparse hairs, like those of a cat's whiskers.
The "mouth of a lion" can obviously not be applied to the appearance of the teeth, since the latter were absent (see the following point); evidently, the expression  means an enormous mouth, very wide; as for the bony border in the place of teeth, Bernard Heuvelmans (personal communication) judiciously attributes it to the gums of a toothless old man.

All these characteristics have been registered in many current testimonies on the Hairy Wild Men of North and Central Asia (notably in the Caucasus and Mongolia), and can be found in the frozen specimen studied by Heuvelmans (see the illustration in the previous Bipedia); the extreme hairiness except on the face, with the exception of some downy hairs: "on the cheeks there are some little, short hairs, very sparse, disposed a little like the whiskers of a cat", writes Heuvelmans with respect to the frozen specimen studied by him (HEUVELMANS & PORSHNEV 1974: 219); the widely split mouth, the pointed ears, the human height, etc. One can even wonder if the claimed goat's beard is not a naive description of the vocal sac designed to amplify the cries (as with the siamang gibbon) equally characteristic of the Asiatic wild men.
The feeding is also instructive, as the penchant for milk by the Pyrenian Hairy Wild Men, like the Asiatic ones, has been raised and is an object of tentative explanation (RAYNAL 1989).
Definitively, it does seem that the "satyr: exhibited in Barcelona in 1760 cannot be anything but a typical Hairy Wild Man, i.e. a late Neanderthal, probably originating in the Pyrenees.

Comment: Regular readers of this blog will be aware that I do share the Franco-Russian doctrine that the "wild men" of Asia are relict Neanderthals. The latter were human beings, albeit a different type of humanity to us, with stone tools, fire, hunting skills, the genetic basis of speech, and presumably as similar social organisation to our own, while the former are clearly animals. I also have grave doubts about the genuineness of the Minnesota Iceman, which Heuvelmans described. Nevertheless, the author has done a pretty good job of comparing the Barcelona satyr to the known characteristics of the Caucasian almasties. Is there a more mundane explanation?
A Barbary macaque (Macaca sylvanus)? It has been known since classical times, and exists even today in Gibraltar. I suspect that, had a Barbary macaque been exhibited in Barcelona in 1760, there would be people in the audience who would recognize it. Just the same, I also suspect that it would have been sufficiently novel to be able to draw the crowds without any "hype". But no matter how much hype the foreigner produced, it would be hard to palm off a quadrupedal monkey no more than 25 inches long with a vestigial tail, as a bipedal satyr 5 ft 3 inches high.
A chimpanzee? It would have to be an adult. There is a good reason why such an animal would be a novelty in 1760. At that period no white person ever ventured into the interior of West Africa. From Ramona and Desmond Morris' book, Men and Apes (1966), it appears that only three chimpanzees and one orangutan ever made it to Europe in the whole of the seventeenth and eighteenth centuries. They had to be purchased from the natives, were usually young, and didn't last long. In other words, a fully grown (and dangerous) chimpanzee was not something which would be casually picked up by some passing sailor.
So what was the Barcelona satyr? And what was the original source of the information? Your guess is as good as mine.


REFERENCES CITED IN THE ORIGINAL
Posted by Malcolm Smith at 15:10