The Yeti of Pakistan. 2. Eyewitnesses

Dr Magraner next provided details of three eye-witness reports. The sightings are so explicit, and at such close range, it is hard to see how any mistake could have been made.
Addendum: I have since discovered a fuller report, and have translated several more testimonies here. 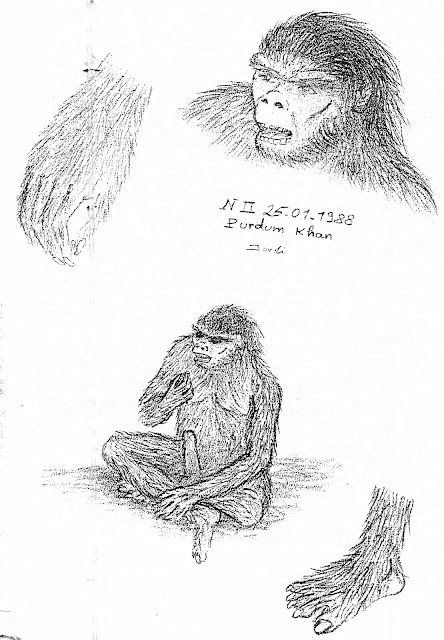 ...In September 1977, Purdum Khan was a shepherd watching over his goats towards the summit of the mountain, at an altitude of 3400 – 3500 metres [11,100 to 11,500 ft], sitting on a rock in the middle of a meadow. It was between 15 and 16 hours [3 and 4 o'clock], and the weather was sunny. Suddenly, a stench attracted his attention towards the lower part of the terrain, an odour resembling that of “a dog or a cat which had been run over three days ago”, according to his expression. The shepherd then noticed a hairy man, three or four metres below him. He remained there, to observe it for two hours, silently, the hairy man being unable to either see or sense him. The shepherd was unafraid because he had already held tell of such beings, and he had his axe with him for defence, if need be. Even if it were the first time, it was normal for him to see a hairy man, and it was out of curiosity that he decided to observe it. The being in question was a young adult male, of medium height (ie for the region, between 1.70 m and 1.75 m) [5ft 7in to 5ft 9in]. It was sitting “like a Muslim” and was eating ant larvae and nymphs, which it was taking between two fingers, the thumb and index. It was in full sunlight, its musculature and thoracic cage being well developed. The overall appearance was of a man, the body being covered with long hair (8 to 10 cm) [3 to 4 in], of a dark maroon brown in colour. It wasn't wearing any clothing. The hairs on its head were long; its face was broad “like that of a Tajik” (an ethnic group frequently with a Mongoloid head), the cheekbones protruding; it had a sort of beard, and only the cheeks, the nasal area, and around the eyes were hairless. The nose was broad and squashed in “like that of a Chinaman”, the nostrils clearly visible. The brow eidges were well developed, broad and prominent, the eyes similar to those of a man, of a dark colour. The ears were of human appearance, but hairy. The forehead was absent and the neck very short. The mouth was big, without apparent lips, with teeth resembling a man's, but more massive. The chin was poorly developed and hairy. The arms and legs were rather long, but more muscular than in a man. In contrast, the hands and feet were very broad, with the palms and soles hairless, and the upper surfaces hairy. The nails, similar to those of a man, on both hands and feet were about two and a half centimetres [one inch] long. To be precise, the fingers were long and the feet very broad in relation to a man's. The penis had an enormous erection, “like a donkey's” (referring, however, to the local donkey, which measures a metre [3 ft 3 in] at the withers). When the hairy man moved on, it walked upright like a man, the thoracic cage in front, the feet turned inwards. The colour of the skin, visible through the hairs, was dark “like that of a Gujar” (an ethnic group with very brown skin). At the approach of a large dog, the hairy man departed straight down the slope, in the direction of the forest. 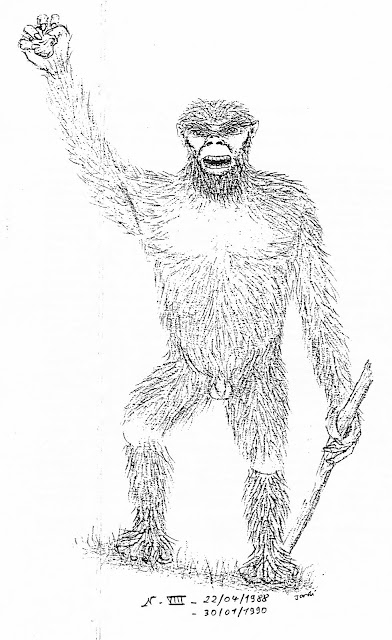 ....Our witness has seen a hairy man three times, in August 1985, 1986 and 1987. In 1987, Lal Khan led out his goats to pasture. Towards 1300 hours, is was driving them across a slope opening out onto a meadow at 3450 metres [11,300 ft] altitude. Some goats, by coughing, awoke a hairy man who was lying at the foot of a large spruce. The tree, backed up against some rocks, formed a shelter with the lower branches descending to the ground. The shepherd saw the hairy man leave his shelter. Somewhat frightened at seeing the man, the being in question threw a stone at him, then turned on his heels and calmly crossed the meadow with the aid of a stick held in his left hand. It headed towards the summit and disappeared under a crest. The hairy man halted from time to time in its walk to gather vegetables and eat them. It made a long detour to follow the contours of the ground. The observation lasted more than ten minutes; the frightened shepherd gathered together his goats and made them go back down.
In 1985 and 1986 the witness noticed the same individual in this same area but at a greater distance. At each encounter the same scenario occurred: the shepherd noticed the hairy man, who moved away slowly with the aid of a stick, while he himself being scared, took his goats back down.
In 1987, it was the first time that he saw it so close (10 yards) and that the hairy man threw a stone at him.
The witness described it as like a strong, very hairy man; a heavy pelage over the whole of the body, except for the cheek bones, the palms of the hand, the knees and the ears. It had a beard, short hair on the head, very broad shoulders, and massive teeth, without fangs. The body hair was dark except on the chest, where it was white...
Iconographic indicators chosen: Homo pongoides, but with dark skin and short head hair. 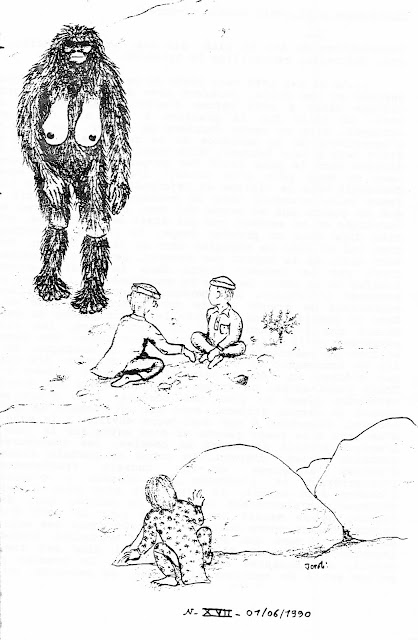