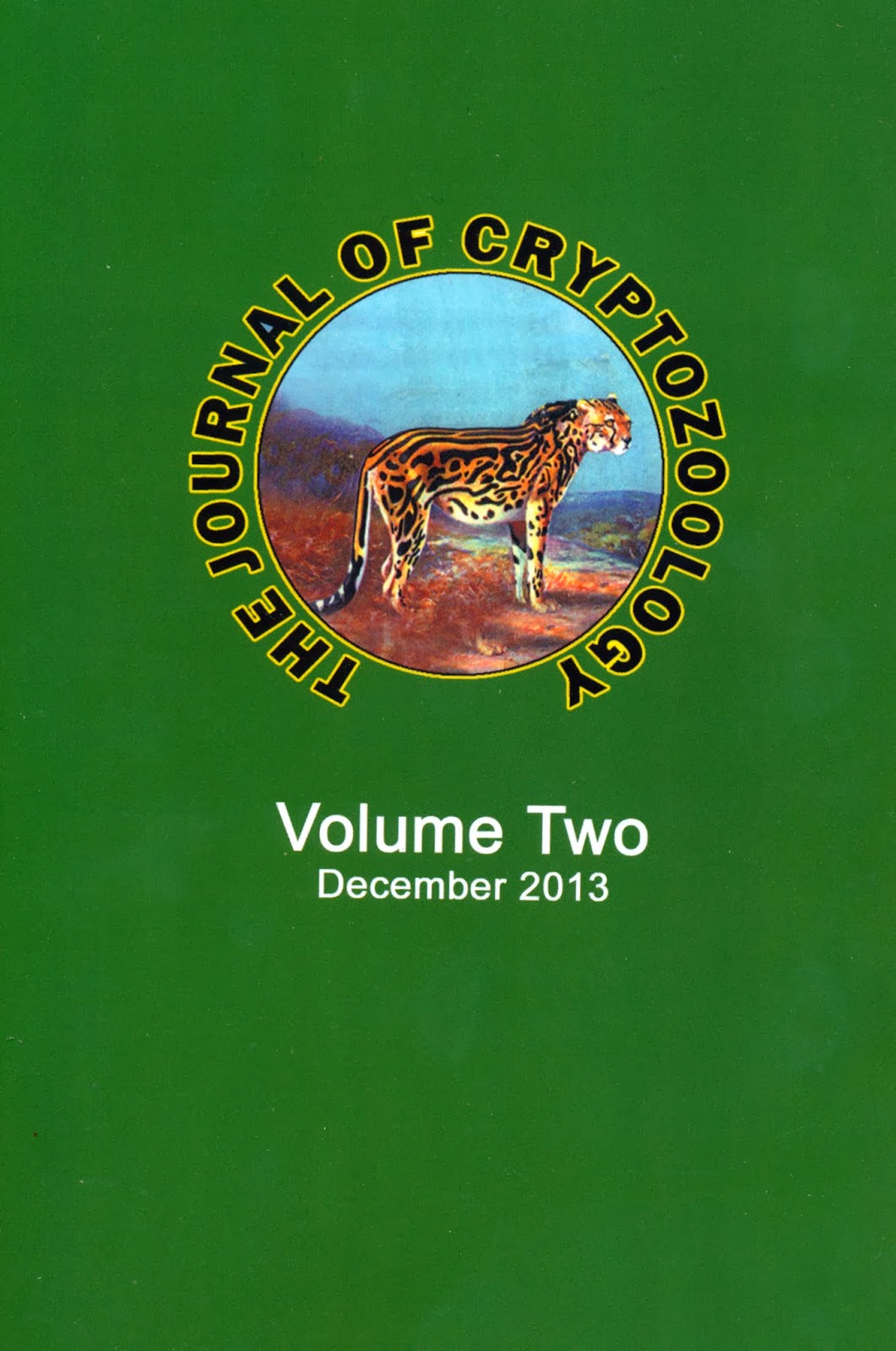 I have just finished reading volume 2 of The Journal of Cryptozoology, which was dated December 2013, but whose publication was slightly delayed. Being both inexpensive, and the only peer-reviewed scientific journal devoted to cryptozoology, it really ought to be on the to-read list of everybody interested in the field.  (I might add that I am left to speculate as to who is who does the reviewing. Normally, prospective papers are sent to whomever looks like they might possess an expertise in the field. I myself was once asked to review a short paper on koala behaviour, because I had already published on the subject. However, in this case, they would need to find experts who would also be prepared to treat the subject of cryptozoology seriously.)
In any case, it is clear that the journal is shaping up to solid professional standards, with four excellent papers covering 65 pages of text.

The first was entitled Three remarkable tales and two challenges for anthropology - an evaluation of recently reported eyewitness accounts of unidentified hominoids from Flores Island by Gregory Forth, a cultural anthropologist who has been studying the societies of the Indonesian island of Flores since 1984. In the process he became intrigued by the folklore concerning small, usually hairy "wildmen", first of all in Flores, then in the remainder of Indonesia, and finally in mainland southeast Asia itself. Here is a review of a recent book he wrote on the subject. Then, of course, in 2004 came the discovery of the fossil remains of the "hobbit", Homo floresiensis, a diminutive offshoot of the human family tree which could, theoretically, give rise to such legends, especially since there is disputed evidence that it may have survived until little more than 6,000 years ago.

Then in 2011, Dr Forth interviewed a man who claimed to have seen, at a distance of only 30 metres, a group of 20 or 30 bipedal primates approximately a metre tall. On another occasion he saw a group of five or six of the same creatures. At first I couldn't get my head around the idea of an unknown primate living in groups of this size on a heavily populated island such as Flores while avoiding scientific discover. However, he points out that Flores is actually 300 km in length and 14,300 km2 in area, and that most of the two million inhabitants are concentrated on the coast, leaving the mountains forested and sparsely inhabited. Also, as an experienced anthropologist, he was able to provide good reasons for believing the witness's story.
He then cites two other incidents. One of the witnesses was a passenger in a vehicle which hit a similar creature, but one only 40 to 50 cm in height. It had disappeared by the time they returned half an hour later. The other involved the capture of a similar creature, also half a metre tall, which subsequently escaped. Stated so simply, the stories sound fantastic, but they are provided in much greater detail, with good reasons given for believing them.

The second article is A historical depiction of a king cheetah in Asia? by Karl Shuker, the editor of the journal. The king cheetah is the animal depicted on the front cover: the cheetah equivalent of the "blotched tabby" domestic cat, the result of a rare mutation which causes the spots to coalesce into stripes, swirls, and blotches. It is recorded only from certain parts of south-central Africa. However, Dr Shuker was able to obtain a copy of a court painting of a hunting expedition by the 16th century Indian emperor, Akbar, which depicts a number of wild animals very realistically. One of them is a normal cheetah, but another is what looks like a king cheetah. Also, there are alleged to be more such paintings in existence.

The lake monsters of Spain by Ulrich Magin is a very strange paper - or rather, a paper on a very strange subject, more folklore than cryptozoology. It is a compendium of modern reports of strange creatures reported from a large number of sites, particularly artificial lakes and reserves. Mostly, they are isolated incidents ie none of these bodies of water possess a lengthy tradition of monster sightings like, for instance, Loch Ness. A few of them appear to refer to oversized catfish, but most of the others are strange even by lake monster standards. Most of them do not appear to be terribly well attested. In one case, he was able to watch the way the story developed on an internet chat site, with the strong suggestion that many of the comments were made tongue in cheek. Just the same, it would seem unlikely that every one of the "lake monsters" was base on a lie, and if any were true, it is hard to see what on earth they might be.

Finally, we have Don Cousins' masterly essay, A preliminary examination of the koolookamba enigma. The koolookamba is an unusual type of chimpanzee with certain gorilla-like features. We know it exists, because there have been specimens taken, but what is it? The story starts with du Chaillu, the discoverer (from the Western perspective) of the gorilla, shooting a koolookamba and presenting to the British Museum its skin and skeleton, of which the skin soon deteriorated. Then Dresden Zoo received an unusual ape named Mafuka, which was later, on dubious grounds, identified as du Chaillu's koolookamba.
Cousins does a remarkable job of following the trail of various specimens, alive or dead, claimed to be koolookambas, quotes the few white men who have seen them in the wild, and explores the bewildering maze of the names and traditions of the native Africans, who do not follow the Western scientific system of species identification. Eventually, a composite set of features emerges, among which are small ears set high on the side of the head, large braincase, large jaws, pronounced brow ridges, padded nasals, and the face often appearing black.
I find it extremely unlikely that it is cross between a chimpanzees and a gorilla. Most authorities regard it as some sort of unusual chimpanzee. The diagnostic features are too complex to result from a single genetic mutation. Is it a new subspecies - perhaps like the very large Bili (Bondo) apes, which have been determined to be genetically chimpanzees? However, the Bili apes are localised in a small area of the Democratic Republic of the Congo, as you would expect of a subspecies. On the other hand, it appears the koolookamba, although everybody agrees it is very rare, occupies an extensive range through the Congo, Gabon, Cameroon, and Equatorial Guinea, the range overlapping that of regular chimpanzees. Also, native traditions are that it exists in much smaller social groups than ordinary chimpanzees. Behaviour is just as much a part of a species' genetics as its physical characteristics. All of this suggests to me that it might be a separate species - but one gradually going extinct.

What else can be said? You can't expect me to do more than summarise the detailed papers. Read the journal. It is not expensive. Read volume 1 also; after all, it contains a paper by me. The journal can be purchased from its own website. You can also address subscription enquiries to the Publisher at publisher@journalofcryptozoology.com.
Posted by Malcolm Smith at 03:56