"The Tasmanian Tiger: Extinct or Extant?" - a Review 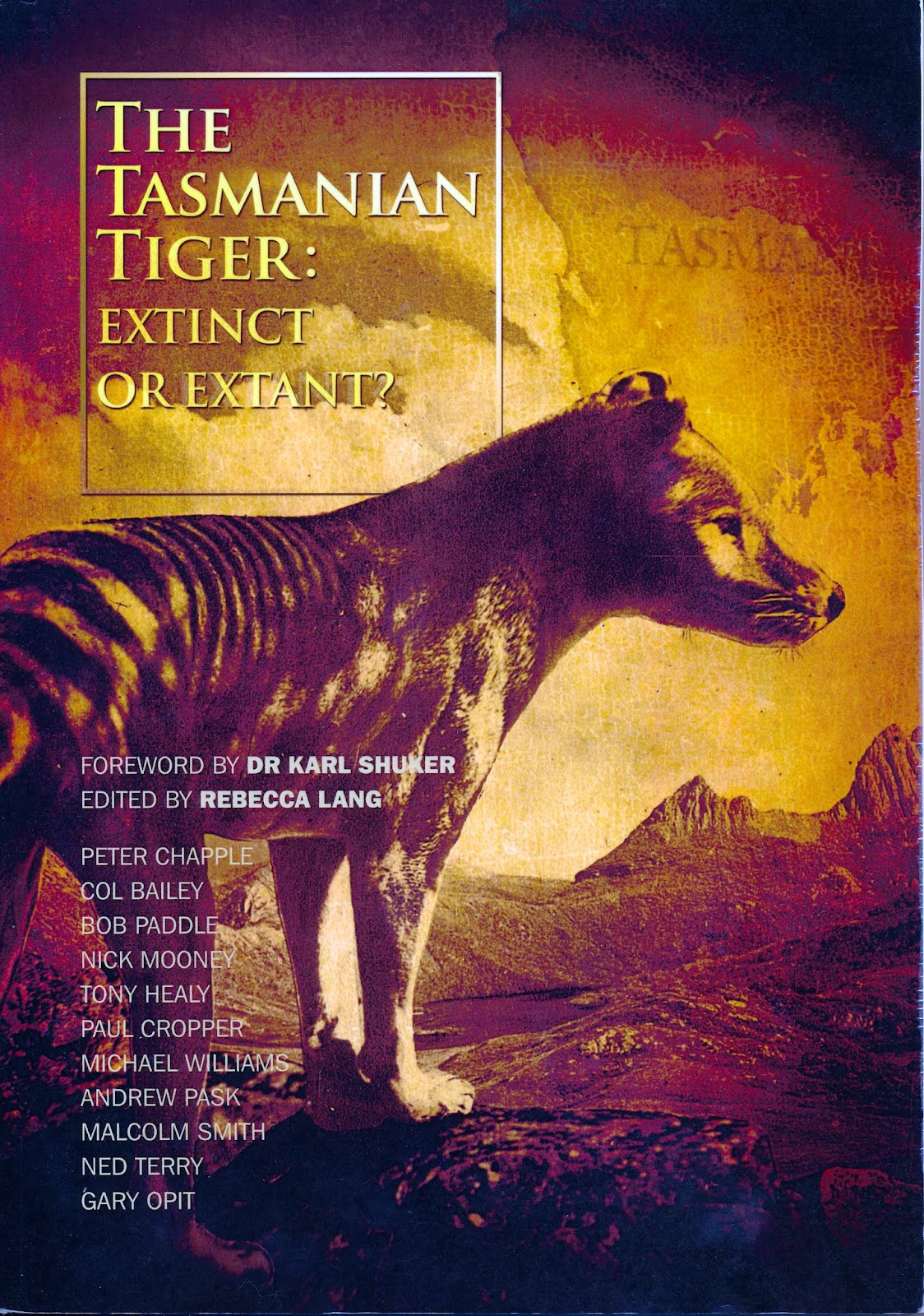 We now move into the even more contested area of alleged Tasmanian tigers on the mainland, where they were never supposed to have been in historical times. For reasons given in an earlier post, I consider 95% of such reports can be written off as either inconsistent with a thylacine or possessing insufficient information. Nevertheless, we can distinguish three separate types of sightings. The first are the minority which would be taken very seriously if made in Tasmania. The second are those where the witness believes he or she saw a thylacine but another explanation is possible. I have previously explained how bridling in dingo hybrids and adventitious markings due to mange can provide the illusion of thylacine stripes, whereas mange, or simply the breed of dog, can produce a straight, non-bushy tail. However, when we consistently hear of both factors being present together, one wonders whether something more is not behind them.
For the third, I should introduce you to a bit of Australian/New Zealand vernacular among those of us who remember the "Clayton's" campaign of thirty years ago. It was a non-alcoholic drink billed as "the drink you have when you're not having a drink". I whimsically classified this third category as Thylacinus claytoni, the thylacine you see when you're not seeing a thylacine. The animal looks like a Tasmanian tiger in most respects, except that something is wrong. These sightings give me no end of headaches. I suppose it is theoretically possible that the thylacine may have evolved slightly different physical characteristics on the mainland from those in Tasmania, but that sounds too much like special pleading. It becomes harder to accept when the "wrong" feature is variable - lack of stripes or too few stripes in one specimen, a bushy tail in another, even spots. Also, Aboriginal art in northern Australia, and the Nullarbor specimen in the south, indicate that the mainland thylacine was pretty much the same as in Tasmania. I think that anyone making a serious case for the existence of thylacines on the mainland should carefully separate the three groups, and not lump them together.
With this in mind, let us continue.


Criticisms
I have already mentioned the removal of sketches and diagrams from the text.
There is inconsistency is referencing. Some authors use alphabetical endnotes and some numerical ones, while I was allowed to get away with footnotes. While this might be simply untidy, there is a deeper problem. Chapter 6 has internal references, but no external ones (endnotes). Admittedly, this was a defect of the original paper, but a bit of editing could have removed it. Two of the internal references in Chapter 7 are not mirrored in the endnotes, while in Chapter 8 eleven of the twenty-four endnotes, one of them a duplicate, correspond to no internal reference.
Thirdly, there is an excessive number of blank pages, both in the rear and between chapters. Also, although before each chapter stands a page-sized photo, it is often not relevant to the text, and appears to act as a space filler. Here, a little technical information is in order. Books and magazines are made by binding clusters of pages called "signatures". This is easier to see in something loosely bound, like a notebook or diary, and is even more obvious in a newspaper, where it is clear that there are four pages printed on each sheet of paper. If the sheet were folded in two, it would make eight pages, if folded again, sixteen. The typical book has eight or sixteen pages printed on a single sheet, or signature. This is then folded such that the pages all line up in the correct order and, after the signatures are all bound together, the folds are cut. Obviously, a publisher must balance the total number of words, the font size, margins etc so that the full text fits into the appropriate number of signatures. Not infrequently, there is some space left over. This is why most books have a few blank pages at the back. Added to the numbered pages, the grand total will nearly always turn out to be a multiple of eight. Check your own books if you don't believe me.
In this case, the 184 B5-sized pages equate to 23 eight-page signatures. In my opinion, one fewer signature would have made the book a lot more presentable. Alternatively, another chapter could have been added. I would have liked to have seen a comparison made with the other cryptozoological activity in Tasmania: the hunt for the fox.
It is believed that foxes have been maliciously or accidentally introduced into Tasmania. One person even saw a fox walk off a boat in broad daylight. If they manage to establish a breeding population, they will devastate the native wildlife just as they have on the mainland. The position is dire. Everything familiar to the search for the thylacine is mirrored in the search for the fox: plausible sightings, sightings proved to be bogus, scientists on the ground seeking evidence, even members of the public scoffing at them. The Department of Primary Industries, Parks, Water, and Environment has built up an impressive amount of evidence. On the other hand, an independent scientific review concluded that there had never been any credible evidence of foxes in Tasmania. Although the latter review has a lot going for it, it must be remembered that this is a field where a false negative can have terrible consequences.
The point to be made is that, when a species is elusive and its population level very low, it becomes extremely difficult to confirm or deny its continued existence. But at least the fox chasers have a secret weapon denied to the thylacine chasers: if there is reason to believe foxes are in the area, they can bring in dogs trained on the mainland to sniff out foxes. If the dogs react positively, then baits can be laid. As poisoned foxes tend to go to earth and perish in seclusion, it is theoretically possible to wipe out an incipient colony without anyone ever seeing a member.
It is interesting to note that Dr Mooney is also involved in the fox eradication program, and on page 47 he describes a typical encounter with a member of the public. A man will tell him it is a waste of money because there are no foxes, but then add that tigers exist because his mate saw one a few months before.


[W]hat intrigues me is that what their mate says they saw completely overwhelms the very considerable evidence of foxes.

Is It Worth Reading?
Yes. You won't get any firm answers, but you will come away with a lot of information which you won't find elsewhere, and which is not easy to dismiss. There are three groups in particular who will find the book worthwhile:
(1) Tasmanians. The "tiger" is a burning issue in that state, and efforts should be made to promote the book there. Unfortunately, it won't turn up on bookshop shelves where passers-by can discover it but, being print-on-demand, it is likely to be around for quite a while.
(2) People with a general interest in cryptozoology - especially Australians.
(3) Australian naturalists and mammalogists. If you are one of this last group, you had better buy it yourself, because your local technical library won't stock it. The people who order for these libaries don't read blogs such as this.
Posted by Malcolm Smith at 22:32