The Beast of Gévaudan - Solved !

Between 1764 and 1767 a huge man-eater terrorised the region surrounding the southern French town of Gévaudan, claiming between 80 and 100 lives. People, often teenagers, tended the fields bearing spears. A detachment of dragoons was sent to hunt the Beast, and. 10,000 citizens were engaged as a battue to flush it out. Several times its death was announced, but the killings kept going on. It took a number of musket balls at relatively close range. The Beast of Gévaudan has become the stuff of legend and speculation. What was it? Officially a wolf. Or perhaps some huge wolf-dog hybrid. Or a hyaena. Or even a werewolf, according to Montague Summers! But now, at last, a German zoologist, Karl-Hans Taake has examined the primary sources, and definitively identified it. 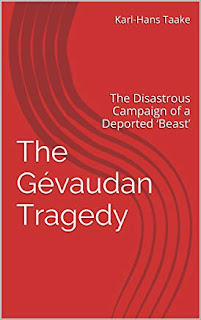 Regrettably, the English translation, The Gévaudan Tragedy is available only on Kindle. I say "regrettably", not because I prefer solid print books - which are rapidly taking over my home -  but because I wonder how valuable works such as this will end up in reference libraries when only a digital version exists.
However, that is not your problem. But you don't have a Kindle device? Not to worry! A free Kindle app can be downloaded for a PC, Ipad, or phone. Admittedly, they are not as easy on the eye as a device, but after all, we are dealing with just a single book - and it costs only about a quarter of the price of a print book. So it you are reading this, you have no excuse for not purchasing the book.
Some extraordinary acts of courage were recorded. On 12 January 1765, five boys and two girls, ranging in age from nine to twelve, were attacked by the Beast. One of them was mauled, and another carried off, but the children, led by the heroic twelve-year-old, André Portefaix, followed it with home made spears and rescued their companion.
Two months later, Jeanne Varlet, mother of six and possibly expecting a seventh, was eating a meal in her garden when the Beast attacked her children. For half an hour, Madame Varlet fought with the Beast, rescuing one child, before it took another. She kicked and hit it, several times jumping on its back, and at one point trying to grab its genitals. Her thirteen-year-old son, armed with a spear, then joined the fray, along with the family dog. Although the Beast was ultimately driven off, the child died. But the encounter at least established two things: the Beast was male, and it was much bigger than a wolf.
France's top wolf hunter came onto the scene, but at the site of the Beast's footprints, his hounds refused to recognize the scent as that of a wolf. And when they finally came face to face with the Beast, those hounds, although trained and experienced in killing wolves, came off second best.
Now, man-eating wolves are very rare, but over the centuries, and over the whole continent, a considerable number have been recorded. Dr. Taake does the number crunching, and showed that the modus operandi of the Beast was very different to that of wolves, both in the type of victims and the time of year selected. Its killing method was also distinct. It went for the throat, and often decapitated its prey. In one case, the head had not only been removed, but the skull broken open like a nut and the braincase totally cleaned out. The author shows that the decapitations occurred predominantly in winter, and he hypothesizes that the Beast was seeking hot blood at a time when fresh water was either frozen or icy cold.
Needless to say, many witnesses were available to provide close up accounts of the Beast, and their descriptions were consistent: as large as a calf, short-haired, tawny or ginger in colour, massive chest trailing back to a narrow abdomen, huge fangs and claws, a flat head, a black line running down the centre of the spine, a long, thin tail, with a thick tip. Not very consistent with a wolf or dog, wouldn't you say?
Wolves and dogs are messy killers; they rip and tear. The Beast's habit of going for the throat is specific to the big cats - as was its batting with its forepaw in defense, and the roaring once reported. The only big cat which fits the description is a maneless male lion. The lack of a mane may have been due to the fact that it was initially a subadult. Indeed, Taake points out that a fully grown, experienced lion would hardly have allowed a group of children to drive it off its prey. However, by the end of its reign of terror it would certainly have been an adult, and the later witnesses described an incipient mane around the throat, but the author also points out that some lions are simply never able to grow a mane. It is this lack of a mane which has prevented a positive identification for so long.
What happened to the Beast of Gévaudan? Several times it had been reported shot, but when the killings finally ended, the wolf slain immediately beforehand was labelled the villain. But it was a quite ordinary, medium sized wolf with none of the characteristics of the Beast. Dr. Taake suggested that the Beast finally succumbed to the massive poisoning campaign undertaken at the time, and so presumably it slunk away into the undergrowth and died.
He suggests it was an escapee from some travelling menagerie. These became common in the latter part of the seventeenth century, and he cites a number of incidents when large numbers of people were killed by "savage beasts":

One wonders what happened to all those man-eaters, and why Gévaudan was treated as something special.
Posted by Malcolm Smith at 17:23