This may be my last translation. Charles Cordier (1897-1994) was a Swiss zoo collector who worked for the Bronx Zoo in New York. In the late 1940s he and his wife, Emy made a lengthy expedition to the Belgian Congo (now the Democratic Republic of the Congo), specifically to collect the Congo peacock, which had been identified only in 1936! However, what I presume was his last expedition to the Congo coincided with the violence and anarchy of Congo Independence. Nevertheless, as well as catching gorillas using nets (they don't do that sort of thing any more) in what can only be labelled the geographic centre of Africa, he heard rumours of not one, but two unknown apes.  Here, then, is his account, translated from the French.


This is not a sensational report, nor is it concrete proof of their existence, but the collected indices are so numerous and troubling that, for me, their existence is beyond the shadow of doubt.
I was in the Congo from November 1947 to June 1949 in order to capture animals for the Bronx Zoo, New York and from April 1956 to December 1961 to collect live animals for a film and, later, on my own account.
It was only in January 1960 that the natives mentioned the names of these two anthropoids before me or, to be more exact, I started to get interested in following up revelations made by them on the subject of the existence of an aquatic mammal which appeared to be a dwarf dugong.
At the end of June 1960 the Congolese independence supervened, along with its sequel of troubles. I was able to make investigations during the first six months of 1960 in the environs of our camp in the Walikale Forest, situated at 750 metres [2460 ft] of altitude in the province of Kivu. I made a tour by automobile commencing at Walikale and followed a section of the road leading to Stanleyville [now Kinshasa] up to 20 km [12½ miles] beyond the Osso River. At this point there is a mining road which makes a bend towards the rear on the left and along the right bank of the Lowa River, which I crossed by ferry to beyond Pense Misale. On this section is found Socomukanga. 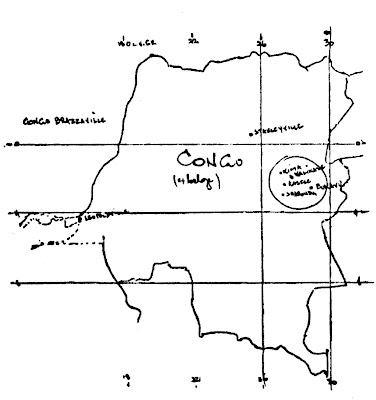 Comment.   Of course, the scientific names he coined for them are not valid, because no type specimens are provided. Nevertheless, from the descriptions, they are clearly apes, but what kind? Unlike most of the higher primates, but like most of the bigfoot-type species reported around the world, they are essentially solitary. I therefore doubt his speculation that they represent different sexes of the same species. When the male of a species is twice the size of the female, it is usually because he keeps a harem.
The author is, of course, correct in his last paragraph. That jungle could hide anything. Let us not forget that it has been only in this current century that the Bili apes - a community of giant chimpanzees - were discovered. (Ironically, they are rather similar to Tarzan's fictional Mangani.) Further east we have the koolookamba which, as I explained elsewhere, is probably an undescribed third species of chimpanzee. You probably imagine that chimpanzees are spread out over the whole of the jungle. Think again! Cordier didn't mention them in his article. Dr Geza Teleki and the Committee for Conservation and Care of Chimpanzees produced a map containing a number of small black blotches indicating known areas, surrounded by heavy stippling for "probable areas", plus a broad stretch of fine stippling, covering most of the forest, for "possible areas". If we know so little about the distribution of our closest relative, which lives in sizeable bands, what else can be out there?
Posted by Malcolm Smith at 02:52