Monday 9 February 1998: there I was, at my desk, minding my own business - or rather, my employer's business - when the phone rang. I found myself talking to a rather excited man, who initially refused to give his last name, asking if I knew anything about apes in Australia. Apparently, he had phoned the Queensland Museum and had been transferred to Dr. Ralph Molnar, the dinosaur expert, because he was the only staff member interested in cryptozoology. Dr. Molnar had then referred him to me. I told him that, yes, I had recently had published a book on Australian mystery animals, and that I had reluctantly accepted that the "yowie", or Australian version of the bigfoot, really existed. He now wanted me to promise that I would believe his story. I explained that this was too much to ask before I heard it, but that I could promise to take it seriously. He wanted information because of a dramatic incident experienced by a couple of his friends at Gatton, but if I ever mentioned his name, he would deny everything. Clearly, I was not dealing with any publicity hound.
Gatton, Queensland is a town of about 7,000 people in the fertile Lockyer Valley, situated at 27½° S, 152° E. It is also within striking distance of my home in Brisbane, so I arranged to drive to his place and interview the witnesses on Saturday 21 February. As confirmation of their credentials was the fact that they wished to remain completely anonymous. It is a familiar story. People who (think they) have seen a big cat or Tasmanian tiger on the mainland are quite happy to have their names published, but those who report a sea serpent or yowie desire nothing more than anonymity. And these people were particularly scared of publicity, for their position in the community left them extremely vulnerable to public ridicule.
The two witnesses were father and son. The wife and mother had been sitting in the back seat of the car, and thus saw nothing at the time except a "shadow". I interviewed the witnesses separately, although it is almost certain they had discussed the matter between them previously.
The Father. Aged 54, pensioner. According to his testimony, the event took place on a Monday two weeks before. That would have made it the 9th February, but since his friend had phoned me that date, I presume it was the previous Monday, 2 February. The sighting took place at 11.30 pm. He was in the driver's seat as they were heading home from Toowoomba in a Toyota. He had turned left into a road which had farmland with a wire fence on the left, and suburbia on the right. His lights were on high beam. Suddenly, he saw an animal on the left of the road, on the road side of the fence. It ran across the road from left to right, about 20 metres away, right in his headlights, and passed behind a blue van on the other side of the road.
At first she said nothing, because he thought his eyes had deceived him, when his wife cried out, "You're going to hit someone!", and his son said, "[Expletive]! What was that?" 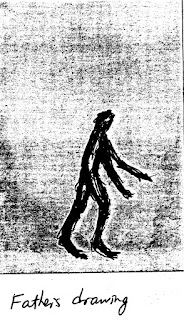 Here is his sketch of what he saw. It was a humanoid shape about 2½ metres tall. When I stretched my arms above my head (8ft 2 in), he said it was about right. It ran across the road very quickly and very lightly - more so than a human being. The foot appeared to be different from a man's - not the ball, but the heel, although he couldn't say exactly how. The animal was seen only from the side, and he couldn't see its face. It was about as slim as I am - which surprised me, because most descriptions of this animal, both in Australia and North America, depict it as very heavily built, rather like a gorilla attached to manlike legs. In any case, it was covered with light brown hair, like a monkey's. When I enquired about its length, he held out his hands about 8 inched [20 cm] apart. The hair on the head was not long. It moved its arms as it ran. He assumed it was male because he saw no breasts. (This is not a valid assumption when dealing with non-human primates.)
The Son. Aged 21, employed in computer graphics. According to him, the event took place about 11.30 pm about two weeks before. He believed it was a Thursday, but his mother corrected him and said Monday. He confirmed the location. The moon was present, but not very bright, and there were no streetlights in the areas. However, the car's headlights were on high beam. 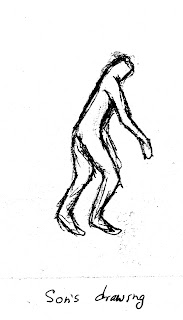 Here is his sketch. He first saw it on the left hand side (which is the passenger side in Australia), on the road side of the fence. It was "travelling" at the time, but in the shadows, and he could not work out what it might be. Cows were often present in the farm, but this was neither cow nor kangaroo. When the car was about 15 or 20 metres away, it broke and ran across the road into the beam of the headlights. It ran like a man, but much faster, with its arms moving slightly, but not pumping like a man's would. The house to which it ran to had three pine trees, and a white van parked there as well. (His mother then corrected him; the van is always there and it is very pale blue, almost white.)
The animal was very tall- easily 6 feet, maybe 7 or 8 - and was covered with brown fur, not very thick, and fairly short. He recognized it as fur because it had the same effect in the lights as has the fur of a kangaroo. The head hair was not long like a woman's, but there was a lot of hair around the head. He didn't see any neck. The body was slim but, because it was taller than me, it may have been more heavily built. He could not tell the sex. The arms appeared longer than normal, but that may have been because its body was stooped. The legs appeared long, but that may have been because it was running at the time.
The Site was actually only a couple of hundred yards around the corner from their own home - one of the reasons they were so scared. It was on the outskirts of town, where suburbia meets farmland. The road is bitumenised, and the normal width for a suburban street. It was obvious that the sighting must have lasted only a couple of seconds, but the son reckoned it was burned into his brain.
In fact, the road faces downhill. You look down over a field of vegetables, and a creek leading to the Gatton State Forest, which covers the whole of the horizon, and is obviously very dense and extensive. On the left hand side was a barbed wire fence about a metre high, or even less, obscured by tall grass on the road margin, but not much behind the fence, where it is presumably subject to grazing. The farm sloped down very sharply to a creek. There was only a few trees on the farm, but the creek was completely obscured by a thick belt of trees.
The father halted the car at the point where he thought he saw the animal, and I paced it off at 30 paces, or approximately 25 yards. His son, however, thought it was much closer: 15 paces. It must be remembered, of course, that the car was moving, and even if the brakes had been applied - and it doesn't seem they were - it would have taken less than a second to cover that distance. The sighting, although brief, would have been very close, in very bright light. 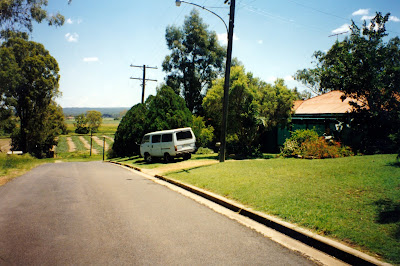 The point of the crossing could be established precisely because, on the footpath on the other side, next to the cub, stood two cypress pines, with very dense foliage extending almost to the ground. Just in front of them was parked an extremely pale blue van. The son claimed that the animal was taller than the van when it ran past. I therefore walked up next to the van, and we were all surprised that it was just as tall as I was: 6 feet, or 183 cm. I then walked over to the second pine which was, naturally enough, a couple of yards downhill from the van. When the son saw it, he realised the animal must have been 8 feet tall. He also remembered that the animal had been close to a tree on the farm before it started to cross. Lo and behold! Right opposite the van and the pines, touching the fence, stood a gum tree. Some yards behind it stood a row of bee hives. This is clear from the first photograph above.
Conclusion. A hoax on the part of the witnesses can be ruled out. Unless we assume that a very tall man (who would be very well known in such a small town) was prowling around in a very strange costume, we must conclude that this was a slim version of the yowie. It almost certainly lived in the state forest, and had followed the belt of riverine trees to the farm area. I wobder what the people would think if they knew a great hairy ape was roaming around their front yards!
Posted by Malcolm Smith at 12:23