When Scientists Were Visited by a Yeti

The trouble with cryptozoology is that its data are all over the place - newspapers, magazines, websites, in fact, everywhere except in peer-reviewed scientific literature. We really need a central registry of personal testimonies, and in lieue of something better, this blog will have to do. So let us take the case of the zoologists camped on a snow-covered pass in the Himalayas, who were visited in the night by an abominable snowman. It is surprising this has not received more comment and discussion in the scientific literature (or perhaps it isn't surprising).
Edward W. Cronin, Jr is best known for his popular 1986 manual, Getting Started in Bird Watching, but for three years in the early 1970s, he was the chief scientist of the Arun Wildlife Expedition. The Arun Valley in eastern Nepal is one of the deepest in the world, and according to Google Maps, it is situated right in the Himalayas at approximately 27½° N, 87° E.
Cronin's 1975 article in the Atlantic is too long to transcribe, nor is it necessary, for more than two thirds of it involves explaining why the presence of an unknown ape in the fastness of the Himalayas is not extraordinary, and speculating on its possible identity. He points out that, when the Arun villagers were asked about the fauna of the valley, they included the yeti as a matter of course. Stories of encounters dating back generations often appeared "so ornamented and corrupted through retelling that they seem impossible", but stories from their own lifetimes were consistent in their descriptions, without any of the elaborations one would normally associate with a monster story. He also made the point that

(t)he behavior described is even more familiar to the scientist. Local villagers and Western observers relate the yeti's behavior that are easily recognized as displacement conflicts, aggressive posturing, and threat displays - patterns which scientists have recently found to be typical of wild ape behavior. The reports seem too good, too accurate, not to be true.

All this strikes a chord with me, because my original field was in ethology, or animal behaviour, and the study of primate behavior was in its infancy when I was at university.
Of course, the villagers were farmers and pastoralists. When travelling, they were forced to keep closely to the trails. The valley, with its numerous gullies, canyons, and slopes, is incredibly steep, and the forest dense. Whenever they attempted to enter it, the scientists had to force their way through, often with a machete. A large mammal could have remained unnoticed just fifty yards off the trail. Of course, the author made the point that the "abominable snowman" doesn't live in the snow. Like the humans, it merely walks through it from one site to another.
Numerous bear footprints were also encountered, and the locals occasionally attributed them to the yeti. Nevertheless, the zoologists were never fooled. Bear prints invariably showed equal-sized, symmetrical arrangements of toes. He might also have mentioned that their habit of placing the hind foot over the print of the front can produce a print superficially similar to that of a human being - at least to the non-professional eye. However, the bear's habit of turning its forepaws inwards is the opposite of the human's, and is certainly the origin of many local legends of beings which walk with their feet turned backwards.
Anyhow, now we come to the nitty gritty. On 14 December 1972, Cronin and Dr. Howard Emery, the expedition physician, set off for the area of the Kongmaa La. ("La" is the Tibetan word for a mountain pass. There really is such a place as Changri La.) Their porters turned back because of the cold. On the 17th, along with two Sherpas, they discovered a depression in the ridge at an altitude of about 12,000 feet [3,650 metres] and less than half an acre [1/5 hectare] in extent, but flat, and covered with firm snow. The weather was beautiful, and the sky clear. Animal tracks were absent. They pitched their two tents.

Shortly before dawn the next morning, Dr. Emery climbed out out of our tent. He called excitedly. There, beside the trail we had made for our tents, was a new set of footprints. While we were sleeping, a creature had approached our camp and walked directly between our tents. The Sherpas identified the tracks without question as yeti footprints.
We immediately made a full photographic record of the prints before the sun touched them. Like the conditions Shipton had encountered, the surface consisted of crystalline snow, excellent for displaying the prints. These conditions were localized to our camp area, and were the result of the effects produced on the depression by the sun and the winds of the previous days. The prints were clearest in the middle of the depression, directly beside our trail, where some ten to fifteen prints, both left and right feet, revealed the details of the toes and the general morphology of the creature's foot. Some of the right footprints were actually on our previous trail, making them difficult to interpret; other prints of the right foot were distinct.
The prints measured approximately nine inches by four and three quarters inches wide [23 x 12 cm]. The stride, or distance between individual prints, was surprisingly short, often less than one foot, and it appeared that the creature had used a slow, cautious walk along this section. The prints showed a short, broad, opposable hallux, an asymmetrical arrangement of the four remaining toes, and a wide, rounded heel. These features were present in all the prints made on firm snow, and we were impressed with their close resemblance to Shipton's prints.
We then proceeded to explore the rest of the trail left by the creature. By the direction of the toes on the clear footprints, I determined that the creature had come up the north slope. I investigated these prints first, following the trail back down the slope. Because the north slope received less sun, it was covered with very deep snow, and the tracks consisted of large punch holes in the snow, revealing little detail. I descended several hundred yards, but the heavy snow made walking impossible, and I was forced to cling to the slope with my hands; the creature must have been exceptionally strong to ascend this slope in these conditions. From a vantage point, I could look down the trail, which continued towards the bottom of the valley in a direction generally perpendicular to the slope, but there seemed little advantage in climbing farther down, and I returned to the top of the ridge.

He then describes how the tracks continued down the south slope, and the scientists climbed higher up the ridge, to see from above how the tracks crossed back and forth several times. A hoax by the Sherpas was out of the question. They sent word back to the other members of the expedition, and the expedition mammalogist, Jeffrey McNeely, came up and made plaster casts of the prints. They also made a new camp, and spent several nights watching for further activity, but were disappointed.
The author listed eleven conclusions about the animal, which I shall summarise.
1. The prints were not caused by melting snow.
2. Nor were referrable to a known species.
3. However, they were similar to the one photographed by Shipton 21 years before, suggesting it belonged to the same species. (More about that later.)
4. They appears to belong to some sort of ape.
5. The animal was bipedal.
6. In full winter clothes and boots, Cronin weighed 185 pounds [84 kg]. Since the yeti's prints were not quite as deep, he suggested a weight of 165 pounds [75 kg].
7. The animal appeared to be nocturnal. (I have commented elsewhere that all of the alleged bipedal primates remain unknown because they are nocturnal, solitary, and shy of humans.)
8. It was inquisitive, having detoured along the ridge to enter their camp and pass between their tents.
9. It inhabited the forest, having come from the heavily forested valley of the Barun, and used the ridge to descend into the forests of the Kasuwa, rather than ascend into the high snowfields.
10. It was very strong.
11. The prints led credibility to the existence of an unknown species in the Himalayas.
Reference: Edward W. Cronin, Jr. (Nov 1975), 'The Yeti', Atlantic 236(5): 47-53
There were two other references which I have not sighted:
McNeely, J. A., E. W. Cronin, and H. B. Emery (1973), 'The yeti - not a snowman', Oryx 12(1):65-73
Cronin, E. W., Jr. (1979), The Arun: a natural history of the world's deepest valley, Houghton Mifflin. It includes a chapter entitled, 'The Night of the Abominable Snowman'. 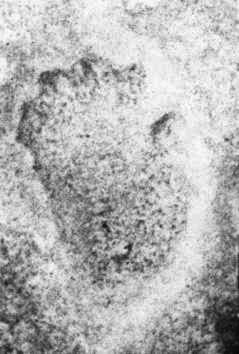 The Footprints. In his 1972 book, Bigfoot, John Napier, at the time one of the world's leading primatologists, estimated height by multiplying the length of the foot by 6.6. Yes, we know that equally tall men can have different shoe sizes, but he was able to show that the formula was accurate to within a few inches, which is all that matters. In that case, the prints described by Cronin would equate to a height of 4 ft 11 in, or 151 cm, and consistent with the estimated weight. He suggested it might have been immature, or a female.
Unfortunately, the article cited contained no photo of either a footprint or a plaster cast. However, the photo on the left was taken from this article, and the source appears to have been Cronin's 1979 book. As you can see, it does bear a resemblance to other prints from the eastern Himalayas. However, the prints of the bar manu of the Chitral province of Pakistan are much different, and more humanlike.
Posted by Malcolm Smith at 18:25