The Thylacine That Wasn't

When researching reports of mystery animals in Australia, the ones which give me the most headaches are not alien big cats (which shouldn't be here), nor the bigfoot-like yowie (which definitely shouldn't be here!), No, they are the ones describing thylacines, or Tasmanian tigers, on the mainland. The reason is, firstly, they were never recorded there in historic times (at least, not in the areas where they are now being reported) and, secondly, it is just so easy to mistake a mundane animal for a thylacine. The most disconcerting thing is, there still remain a residuum of cases which are not so easy to reject. So, my initial feelings were, "Here we go again!" when, earlier this month, I received an e-mail from a Mr. David Szabo concerning his experience in southeast Queensland, close to the New South Wales border. He has generously agreed to let me share the story.
I would like to report a sighting of a thylacine near Donnnellys Castle Queensland. It is a tourist attraction with natural granite rocks that form a system of caves.  After visiting Donnellys Castle we were heading back to Stanthorpe.  It was around 11:53 am when we were driving along Donnellys Castle Road, which is an unsealed fine gravel road. It was around 3 minutes drive from the tourist attraction. I couldn’t believe my eyes, a thylacine appeared on the right hand side of the road and ran out in front of us about 15 metres distance. It started running from the right hand side of the road across to the left hand side of the road.
“Thylacine!” I cried out to my wife as it ran across our path.
“What is that?” my wife asked as it darted across the road.
“It’s not a dog!” “It’s a thylacine!” I replied, “A Tasmanian Tiger!”
I immediately pulled the car to the left hand side of the road and stopped the car. I stared across my wife in the passenger seat through the left passenger window and spotted the thylacine. It was only about 10 metres away in the scrub.  The thylacine and I stared at each other for around 20 seconds. It had short, round ears, and a triangular shaped face. It’s eyes looked golden-brown, not dark brown like a regular dog. The head was a lighter tan colour to the rest of his body. I grabbed my mobile phone and turned the camera on. I exited the driver’s side of the vehicle. I made my way around the front of the vehicle towards the thylacine. It turned and ran off into the scrub. I walked in the direction the thylacine ran for a few metres, scanned left and right, but I could not spot it again. I then returned to the vehicle. I noticed there is a green house about 50 meters on the left hand side of the road past where we sighted the thylacine. It appeared to be a young adult. It would have been around 45cm high at the shoulder and about 90cm in length. The tail was around 50cm in length. It’s body was a dark tan colour  with short hair and had distinctive black bands on it’s hindquarter, the rump and tail were black. The tail was fairly straight and was a long sharp conical shape. This is an experience my wife and I will never forget.
So, the sighting was at close range, and the description of the head, ears, and tail sounded reasonable, but the rump and tail of a thylacine are not supposed to be black. I therefore requested further information. In response, Mr. Szabo sent me two screenshot pictures, with the following comment:
Its tail looked just like the smaller one in the first photo definitely solid black without stripes, the body was more of a grey colour like in the second photo.  As it ran across the road the tail was nearly dead straight, only a very slight downward slope of 22 degrees. It ran with a weird gait, not like a dog.

He also added:
I could see about 6 stripes near the rump like in the second picture, but because it was moving I didn't notice the stripes further up the back. 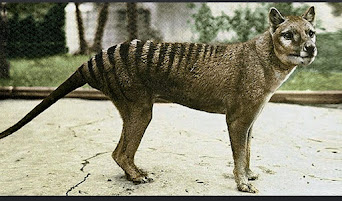 From all this, it would appear to have been the sort of sighting which would have been taken very seriously had it occurred in Tasmania. Nevertheless, I still had some lingering doubts. This thing shouldn't have been there. Also, there was still the possibility of a mistaken identity. I felt like putting it in the file labelled, "Who knows?"
Finally, out of the blue, arrived another e-mail from the witness:
Just a follow up email with regards to my supposed sighting of a thylacine in the Stanthorpe area Friday last week. I have done a lot of research online in the past few days and have come to the conclusion that what I did in fact see was a fox with the early stages of mange. The fox was the same colour as the attachment, a grey brown colour rather than the usual red brown that we associate with foxes. If you see the attached photo of the fox with extreme mange you notice it's dead straight tail, which is what I witnessed, however, the fox I saw had a black tail. The photo of the wombat with mange shows the creased skin amongst the fur, which when viewed from a few meters away, could be mistaken for stripes in the fur. And finally the photo of the fox face. From a few meters away could be mistaken for a thylacine - however, the eye colour does not match the black/brown colour that we normally associate with the thylacine. 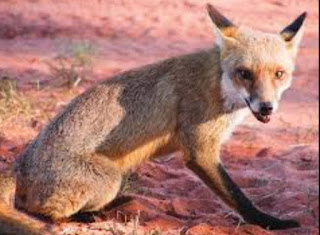 So there you have it. And it just shows why you must be so very, very careful when observing an unknown animal, and even more exact when questioning a witness.
Large dogs can sometimes also be mistaken for big cats, if your mind is set that way. However, it is hard to think of anything which can be interpreted as a yowie.
Wombat footprints are also similar to those of a thylacine. Nevertheless, I have heard several reports of "thylacines" which are better than this, so I am left to wonder. 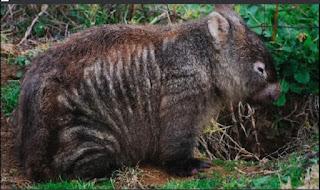 Email ThisBlogThis!Share to TwitterShare to FacebookShare to Pinterest
Labels: thylacine