Yes, There Really Are Pygmy Elephants.

Let's be realistic: the idea of a big hairy ape stomping around North America, all unnoticed by science, is weird. I'm not saying it's impossible, but it is definitely counter-intuitive. Even weirder still is the idea of monsters, which don't breathe air, lurking in our lochs and lakes. But there is nothing weird about pygmy elephants wandering the trackless depths of the African jungle. The jungle is big enough to hold them all. The pygmy elephant was described back in 1906, and named Loxodonta pumilio, and since then they have been repeatedly sighted in the wild, and live specimens have even turned up in zoos. Nevertheless, the scientific consensus has been that they were just dwarf individuals of the known elephant species, or juveniles roaming in their own temporary bands.
Nevertheless, 30+ years ago, two German zoologists, Drs Martin Eisentraut and Wolfgang Bohme marshalled the evidence and produced two papers establishing the existence of the animals. As they were published in German in the journal of the Cologne Zoo, a publication not prominent in the libraries of English speaking universities, they were largely ignored by English speaking scientists. Fortunately, the now defunct International Society of Cryptozoology got hold of them and summarised them in their newsletter. It is these summaries which I now intend to summarise in turn.
To start with, there are two official species of African elephant: the huge bush elephant, L. africana of the savannas, and the smaller, but still big, forest elephant, L. cyclotis of the jungle. And we know where they live, don't we? Think again! The pygmies, who are hunter gathers, no doubt know, but although the agricultural tribes do indeed consume large quantities of "bush meat", their villages are located alongside rivers and roads, and their expeditions into the jungle are perfunctory. 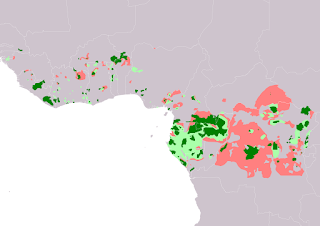 Here is a map by Alexander Kürthy showing the probable range of the forest elephant. The dark green reveals where it is known to exist, the light green where it might exist, and the pink where it may well be extinct. That's a lot of uncertainty about something as big as an elephant! It also means a lot of ground where a smaller variety of elephant can hide.
The pygmy elephant was first described when a specimen was captured by the famous animal collector, Carl Hagenbeck and housed eventually in the Bronx Zoo in New York. Although an estimated six years old, it stood only 6 feet [1.8 metres] tall, as big as a 18-month old forest elephant. By the date of its death nine years later, it had grown only another half foot.
In 1911, a Belgian officer, Lt. Franssen in what was then the Belgian Congo, but is now the D.R. Congo, captured and sent to his homeland an elephant only 5ft. 5 in. [1.6m] high, with tusks over 2 feet [60 cm] long, indicating it was mature. People kept seeing them, and then in 1932, a major P. Offerman, at Gangala-na-Bodio in what is now the D.R. Congo, reported the capture of two adult elephants, both between 4 and 5 feet [1.2 - 1.5 m] high. That they were adults was proved by the presence of "long and stout tusks almost touching the ground."
Equatorial Guinea is a small nation squeezed between Cameroon and Gabon, and used to be known as Spanish Guinea. 1962 saw the publication of a book on the country's wildlife by a certain A. Basilio, who wrote (in Spanish): "In the interior of the vast forests, we saw trails made by elephant herds, with track sizes no bigger than that of juveniles of the common elephant (cyclotis). We also saw tracks of single elephants, and these were exactly the same size as the tracks of the group-living elephants. However, we never found small elephant tracks mixed with normal-sized elephant tracks, and this clearly indicates group homogeneity." In other words, these were not juveniles or dwarf individuals, but genuine pygmy herds.
He also provided a photo of an adult elephant just 6½ feet high, shot by Captain Chicharro near the Benito River. Its tusks measured 28 and 29 inches [71 and 75 cm]. Not only that, but it lived in a herd of 21 individuals, all of which left footprints smaller than 12 inches [31 cm]. The sole pads of all the forest elephants shot by Chicharro measured 16 to 20 inches [43 to 51 cm]. The local natives gave two different names to the two types of elephant, and insisted that the pygmy ones were more aggressive.
Between 1969 and 1985, animal collector, Ulrich Roeder made 16 expeditions into the heart of the Cameroonian jungles. On his fourth expedition, near the border of Equatorial Guinea, he found many elephant tracks only 10 or 11 inches [26 to 29 cm] across. The following year, he was able to inspect a male elephant which had been shot. Its teeth revealed its age to be 16 to 18 years, but its estimated weight was only 3,080 lb [1,400 kg], and its tusks 29 inches long.
Eisentraut and Bohme also examined a collection of pygmy elephant skulls, and discovered differences between them and the forest elephant. Finally, a French zoologist, L-P. Knoepler told Bohme how, in a pygmy village in Gabon, he had examined two elephants which the villagers had killed in the swamps. They were a female with a shoulder height of 5ft 3in [1.6m], and a male 6 ft [1.8 m] high. In other words, they were the same size as juvenile forest elephants. However, they weren't juveniles; when the pygmies butchered the female, they found she was pregnant with a full term fetus!
All of this should be sufficient to establish that the pygmy elephant is a separate taxon. Furthermore, once Eisentraut's and Bohme's first paper was published, it inspired other witnesses to contact them - enough, in fact, for a second paper. Thus, R. Bechinger told how he had repeatedly found signs of bands of small elephants, leaving small diameter tracks, at the Debo River in the Ivory Coast, and that the Bete tribesmen distinguished them from the regular forest elephants. The Ivory Coast, I need hardly mention, is a long way to the west of the other reports. He also heard of similar reports from the Makokou and Lambarene trines in Gabon, and he himself saw a small individual designated a "pygmy elephant" in the zoo in Kinshasa, in what is now the D.R. Congo.
In addition, Claus C. Müller wrote how, in 1963-64 he served as veterinarian for the private zoo of the President of Liberia. A pair of very small elephants, the male of which nevertheless possessed very long tusks, were present in the zoo. They did not grow during the two years he was there, and they hadn't grown by the time he returned in 1970. It was believed they had been imported as a gift to the President from what is now the Republic of the Congo (not to be confused with the Democratic Republic of the Congo).
But the most telling evidence came from Harald Nestroy, the West German ambassador to the Congo, who, in 1982, found himself in the swampy Likouala area close to the borders of Cameroon and the Central African Republic. (Keen cryptozoology fans will recognize this as the alleged habitat of an even stranger cryptid, the sauropod-like mokele-mbembe.) There he watched a herd of four adults and two juvenile elephants cross a clearing just 30 feet in front of him. He could see that the youngsters were merely the size of sheep dogs, while the fully tusked adults were no taller than a human being. Not only that, but he later watched a herd of forest elephants follow the same path, accompanied by forest buffalo. He could see at once that these elephants were bigger, and that the buffalo were about the same  size as the pygmy elephants had been. (The forest buffalo, Syncerus caffer nanus is only about 4 feet high.) 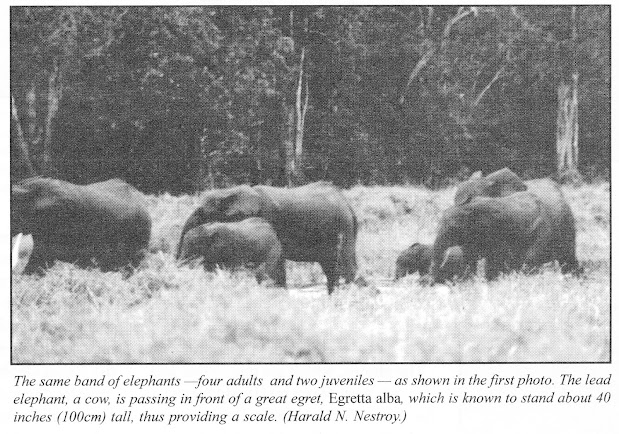 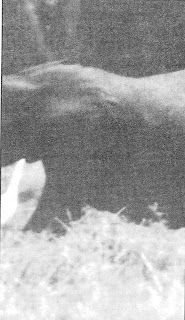 Fortunately, he managed to take a couple of photographs of the pygmy herd, the second of which is shown above. The white thing on the far left is not some weird-looking tusk; the lead female had just passed in front of a great egret, Egretta alba. Here is a close up on the right. The importance of this is that the standing height of these birds is known to be 40 inches [101 cm]. From this it is clear that the height of the adult elephant cow is only 5 feet, or 1½ metres.
But are they a separate species? In 2003 a paper was published in which four scientists compared the mitochondrial DNA of 9 specimens labelled as dwarf elephants, against 8 of regular forest elephants, and a few of other elephants. Their conclusion was that the pygmies are not a separate species, but fit within the forest elephant clade.
Nevertheless, considering that they have now been shown to form separate herds of their own, I strongly suspect that they rank as a subspecies with the forest elephant species.
References
Martin Eisentraut and Wolfgang Bohme (1989), 'Gibt es zwei Elephantenarten in Africa?' Zeitschrift des Kölner Zoo 32(2):61-68.
(1990) 'Zur weiteren Dokumentation des Zwergelephanten (Loxodonta pumilio Noack, 1906)' ibid. 33(4) 153-8
The author of the summaries in the Newsletters of the International Society of Cryptozoology was not given, but was almost certainly the editor, J. Richard Greenwell.
'New evidence supports existence of pygmy elephant' The ISC Newsletter 9(1): 1-6 (Spring 1991)
'New pygmy elephant photos indicate separate species', ibid. 11(1):1-3 (1992)
Posted by Malcolm Smith at 14:53