Up Close and Personal with Ogopogo

I was a foundation member of the International Society of Cryptozoology (ISC) in 1982, even contributing to its peer reviewed journal, Cryptozoology, and continued until it folded in 1998. Recently, I was going through the old Newsletters, and found an article I remember well: of a close encounter with Ogopogo which, I am sure you are aware, is the monster of Lake Okanagan in British Columbia, Canada. Reading it again, I realised that it had never been published elsewhere. As you are unlikely to have any copies of the ISC Newsletter, I shall share it with you. The author was anonymous, but was almost certainly the editor, J. Richard Greenwell, now deceased.
Close Encounter in Lake Okanagan Revealed
ISC Newsletter vol. 6, no. 1, Spring 1987 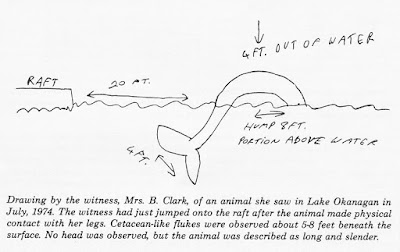 A remarkable "close encounter" between a "lake monster" and a Canadian woman in the 1970's was recently revealed to the Society. The event took place near the southern shore of Lake Okanagan, British Columbia, Canada, when the witness, now a married woman, was a teen-age student. The witness, who wishes to be referred to simply as Mrs. B. Clark, was alone at the time, and had actual physical contact with the unknown animal while she was swimming. This is the first time Mrs. Clark has publicly described her experience.
It is believe that this is the first time that a witness has had physical contact with a "lake monster," or at least has claimed to have done so.
The exact date of the event is no longer recalled, but Mrs. Clark, in her report to the Society, states that it occurred in mid-July of 1974, at about 8 a.m., while she was taking a morning swim in the lake. The sky was partly cloudy, but it was generally sunny and warm. The lake's surface was "ripply."
Mrs. Clark's report states: "I did not see it [the animal] first. I felt it. I was swimming towards a raft/diving platform located about a quarter of a mile offshore, when something big and heavy bumped my legs. At this point, I was about 3 feet from the raft, and I made a mad dash for it and got out of the water. It was then that I saw it." The report goes on to describe the observation: "When I first saw it, it was about 15 to 20 feet away. I could see a hump or coil which was 8 feet long and 4 feet above the water moving in a forward motion. It was traveling north, away from me. It did not seem to be in much of a rush, and it swam very slowly. The water was very clear, and 5 to 10 feet behind the hump, about 5 to 8 feet below the surface, I could see its tail. The tail was forked and horizontal like a whale's, and it was 4 to 6 feet wide. As the hump submerged, the tail came to the surface until its tip poked above the water about a foot . . . About 4 or 5 minutes passed from the time it bumped me until the time it swam from view." 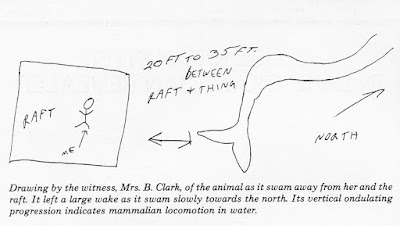 The report by Mrs. Clark went on to give specific details: the estimated length of the serpentine-shaped animal was 25 to 30 feet. Its breadth was estimated at 3 to 4 feet. Its color was described as "a very dull dark grey." No head was observed, and it appeared that the animal kept its head below the surface. The witness "got the impression that the head joined the body without a neck -- like a fish or snake." She also felt that "it may have had fins, but it didn't see any." No hair was discerned, but "on its back it had light colored stripes and on its tail it had light colored round spots. The animal was long, narrow, and smooth. Because it was moving away, I could only see its back and tail."
The report continues: "It was in the process of diving when I first saw it. It did not completely surface again, but it was so large and the water so clear that I could see it very well as it lazily swam north just a few feet below the surface . . . It swam north in an undulating manner. Although it swam smoothly and well, it created a very large wake. It traveled about 3-5 miles per hour. It moved up and down . . . After it was too far away to see any more, I could still see the large wake for several minutes until it too disappeared." The animal itself was not heard to make any call or noise, and no cetacean-like blowing was heard or observed. Mrs. Clark believes that the animal "was very curious about me" and "the shock of seeing it freaked me out."
In her summary, Mrs. Clark states: "At the time, I could not believe my eyes, so I told myself it was just a big fish. However, fish don't grow that big (in lakes anyway) or behave the way this thing did. This thing looked and acted more like a whale than a fish, but I have never seen a whale that skinny and snaky-looking before. Nor have I ever heard of any that fit that description. I have seen killer whales perform at the Vancouver Aquarium, and although the animal I saw had a whale-like tail, it didn't use it the same way as normal whales. By this I mean that it didn't seem to rely on it to the same extent as regular whales. Instead of using it as its main source of propulsion, it kind of "humped" itself along like a giant inchworm . . . I really have no idea what I saw, but it was definitely not reptilian, and I'm sure it wasn't as fish."
Mrs. Clark also stated that she did not report her encounter at the time as "I was afraid no one would believe me." After receiving the report, the Editor contacted Mrs. Clark to propose publishing the highlights of her encounter in the Newsletter, and, because reservations had been expressed about unwanted publicity, to propose that a pseudonym be used. Her response was: "Although we are not seeking publicity, I would not mind you using the report provided you refer to me as Mrs. B. Clark. We do not want our address used, however. While we wish to remain semi-anonymous, to protect our privacy, we would find it offensive to see my sighting in print with another name attached to it."
. . . . . . . . . . . . . . . . . . . . . . . . . . . . . .
That, then, is the story, and it appears to be the most detailed description of "Ogopogo". What was it? The term, "cetacean" means belonging to the order of whales and dolphins, and the witness constantly referred to the animal's whale-like characteristics. First year zoology courses will teach you that mammals flex vertically when moving, while reptiles, salamanders, fish, worms - in fact, almost everything else - flex horizontally. There are reasons for this, which we won't go into, except to say it is a function of the way mammalian limbs have been moved vertically under the body to permit a more efficient gait. For this reason, a whale's tail flukes are horizontal, while a fish's  are vertical. Mrs. Clark was correct in stating that whales use their tails as the primary source of propulsion, but mammalian spines are flexible vertically, and an elongated whale could probably increase its vertical flexure by adding its lumbar spine ie the region behind the ribcage, to the equation.

In point of fact, among the archaeocetes or zeuglodonts, the predecessors of modern whales, there once existed an elongated family, the Basilosauridae. They have long been proposed as an explanation for some "sea serpent" sightings. Moreover, Dr. Roy Mackal proposed them as explanations for, not only Ogopogo, but similar "monsters" in other Canadian lakes, and suggested they can enter and leave more or less at will, through connecting rivers and marshes. The author of the article agreed, and suggested that Mrs. Clark had actually observed, and been touched by, a zeuglodont. It makes perfect sense. So there you have it: Ogopogo is a living fossil, a Basilosaurid.
But not so fast! I hate to have to correct zoologists more experienced than myself, but although Basilosaurids might well explain many sea serpents, there is a very good reason to rule them out as lake monsters: they have to breathe. And no matter how long a whale might hold its breath, it has to come to the surface at frequent intervals. As I put it on my essay about lake monsters,

[a]lthough a sign at Lake Okanagan declares that it is the home of Ogopogo, you know you would have to be incredibly lucky to see it. And let's be realistic: how long would it take for even a single whale to exist in even a large lake before its presence became of regular occurrence for every boat-user on the waters, it acquired a pet name, its movements were tracked in the local press, and tourists were setting out with a reasonable expectation of sighting it?

Email ThisBlogThis!Share to TwitterShare to FacebookShare to Pinterest
Labels: SS