The yowie, for those who are unaware, is the Australian version of the North American bigfoot. Of course, it shouldn't exist, because Australia is marsupial country, and no non-flying, non-swimming placental mammal larger than a rat has ever arrived here without human help. I didn't believe in it, until the evidence became too strong to ignore. In their definitive work on the subject, The Yowie, Tony Healy and Paul Cropper catalogue sightings and encounters from the south of the continent all the way up to north Queensland. Newspapers have not been as active in reporting sightings as they used to be, but last month a major capital city newspaper provided a glimpse into the situation in north Queensland. I have therefore decided to copy the report which appeared on page 26 of The Sunday Mail (Brisbane) on 7 February 2021.
YOWIES AFOOT!
Hunt for Queensland's mythical creature
by
Nathan Edwards
Lionel Carroll was just eight when he claims he had his first yowie encounter. Now an adult, he hasn't forgotten about the hairy, ape-like creature and he's found other like minded north Queenslanders to help him prove they exist. Mr Carroll created the Far North Queensland Yowie Research group on Facebook in 2019 after having multiple run-ins with large creatures he claims were yowies.
"It was at my grand-dad's house in Tully when I was about eight, but I put it all behind me because I couldn't prove it," Mr Carroll said, speaking of his first encounter. "But a few years ago I was on the outskirts of Mareeba and late at night I heard a sound, busted out the side door and saw this large creature shamble over my back fence, and the weirdest part was finding the torn remains of a large kangaroo leg in my yard. There's not many creatures that I can think of that look like that and can do that."
Mr Carroll said he had now heard dozens of stories from other north Queenslanders who have had similar encounters. He now leads yowie hunting parties and has heard of sightings from south of Mission Beach to Port Douglas. The group's exploits have also been able to convert non-believers, with Mr Carroll citing one "professional" who was left "speechless" about the discoveries made on a single expedition, including one that nearly hurt his son.
"My son and another lady, who claim they are both sceptics, walked down to a remote creek after we had heard strange noises," he said. "He saw something in the trees and then a huge rock the size of a football came screaming out of the dark, smashed onto another rock a few inches from his feet and made this huge cracking sound. I've never heard anything like it."
While Mr Carroll understands there are still "hundreds" who doubt the yowie's existence, he called any effort to undermine the legitimacy of [the] creature to be "close-minded" and disrespectful to the ancient Aboriginal stories and culture around the creature. "This isn't something that came up recently, there's been sightings all the way back to the early 1800s," he said. "Even if 90 per cent of these stories are bulls---, 10 per cent of it is still real and that's enough for me."
..........................................................................................................
Below are three photographs included with the story. The first is of Lionel's son with the rock which almost hit him. I express no opinion about the other two. 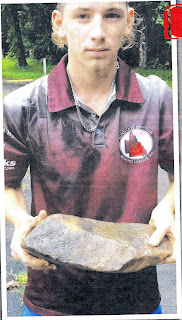 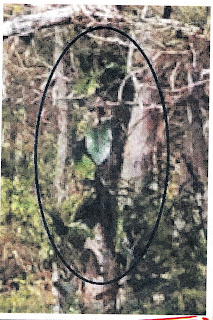 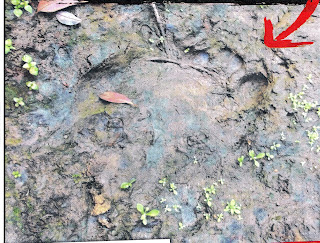